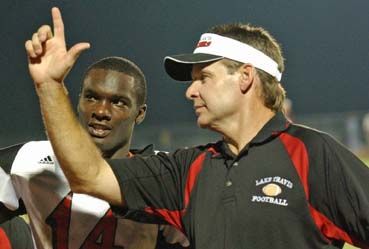 Upon his introduction at Lake Travis in 2003, Dicus described himself as a program builder. His first head coaching job came at Boerne High School in 1998. Boerne had been 3-7 the previous season and in his three years Dicus got the Greyhounds back into the playoffs in 1999. After a 6-4 2000 campaign, Dicus moved south to Mission, where he inherited a Rio Grande Valley team that had missed the playoffs in 2000. In his second year, Dicus not only had the Eagles in the playoffs but into third round before they lost a heart breaker to New Braunfels. His challenge at Lake Travis may have been greater, but he had the Cavaliers in the playoffs in his second year and had done the previously unthinkable, winning it all, in his fifth year.

“Coach Moss calls me a missionary coach,” Dicus said later. “A missionary goes around and helps different cities or countries.”