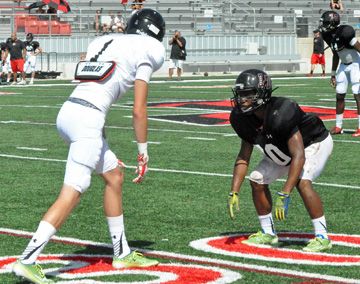 “I would think they’ve been thinking about this game for a long time,” Carter said. The names and faces have all changed, but chances are Midway remembers the last time the two teams met. The Cavaliers rode their defense to a 22-7 win in the 2011 4A, Division I title game, claiming their fifth straight championship in the process. The current senior classes would have been freshmen in 2011, and none would have played in the game.

· Panthers more than a big offense

From 2010-2012, the Panthers won at least 12 games each year and posted an overall record of 37-5. In each of those seasons, the team that beat them in the playoffs played for the state championship. In 2010, Denton Ryan ended Midway’s season in the third round. Ryan went on to lose to Lake Travis in the title game. In 2011, the Panthers reached the title game, falling to Lake Travis. In 2012, Midway won its first 13 games before losing to Cedar Hill in the regional championship game. Cedar Hill lost to Katy in the title game.

There are currently 17 Midway graduates playing college football, including five at nearby Baylor, two of whom would have played against Lake Travis in the 2011 championship game: Orion Stewart and Jamie Jacobs. Oregon State’s Hunter Jarmon and SMU’s Shakiel Randolph also played in the 2011 title game. Levi Norwood, a 2010 Midway graduate, should be one of the top receivers in the Big 12 playing at Baylor.