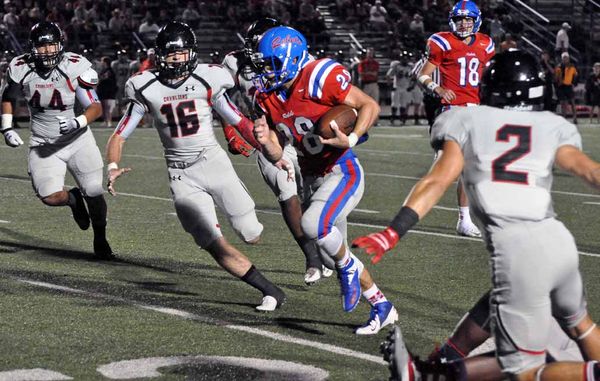 With bye, Cavaliers focus on fixing themselves

Fresh off a 62-23 District 14-6A opening win at Hays, Lake Travis finds itself with some time to itself at an uncharacteristic time during the regular season.

The Cavaliers enter their bye week having won two in a row after dropping the season opener to Waco Midway. For most, a bye this early in the season has taken some getting used to. In each of the past two seasons, Lake Travis’ open date came after the regular season finale.

“I liked it at the end of the season [before the playoffs] because we’d know who our opponent is going to be and have more time to prepare for them,” said senior safety James Bailey. “This is going to be a little different but we’ll adjust to it.”

Head coach Hank Carter said he’s identified plenty of work for Lake Travis to do before he deems this team playoff ready, especially on the defensive side of the ball.

“We’re going to work on us,” he said of the bye-week plan. “We’re not executing and we’re not playing hard enough. Our effort has to improve. There are several factors contributing to that, but [as coaches] we have to do a better job holding [players] accountable and then putting them in position to make plays. There have been two games where I’ve been disappointed in how our defense has played. We’ve got some very talented kids, and we have to do better than that.”

To get better, Carter said the coaches can afford to slow the normally frenetic practice pace to concentrate on areas of improvement, be it offense or defense.

“During bye week, we can slow down and look at us,” he said. “We’ll spend a lot more time in small groups and really work on polishing our game up. We’re going to take the time to fix the things that we are doing wrong. Whether it’s an alignment issue, leverage on the ball or spacing with the wide receivers, whatever it is, and there’s a laundry list of things we’ve got to improve upon, we’ve got some time to do that. ”

While it sounds like he’s being hard on a starting defense that has allowed just three touchdowns in its last two games, Carter doesn’t see it that way. He sees a defense loaded with talented players who haven’t played up to his – or the program’s – expectations. Yet.

“Right now, we are not near to our potential,” he explained. “I’ve told the kids this. There may come a time when I’m standing in front of a Lake Travis varsity football team and I don’t words like state championship potential, like potential to be the best defense in the history of the school. I’ve used those comments with this group of kids because I believe it, and so do our coaches. That being said, we’re not playing like that, anywhere near that.”

“We have the players to be a great defense,” Bailey said Monday. “We just need to actually get together and play the game how we know how to play defense.”

And so the Cavaliers will attack the bye week with an eye on fixing themselves. There will be some attention paid to Del Valle as well, Lake Travis’ opponent on Sept. 26.

“It’s an off week, but at the same time we have another district game the following week, so we’re going to work,” he said. “We’re going to use our time wisely this week and I think we’re going to be a much better football team after we come out of our bye week.”

And how will the Cavaliers’ spend their Friday night off the field? They may go to a game, but they don’t expect to burn the midnight oil.