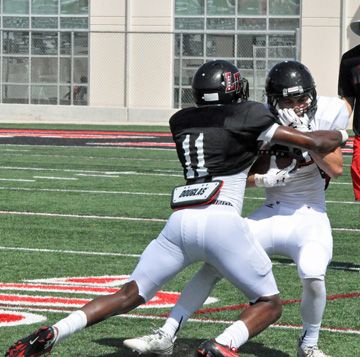 Offense sells tickets, but defense wins championships. While it may have taken a few years to own the age-old adage, recent Cavalier teams have proven that there’s more to Lake Travis than just a high-scoring attack.

Since Hank Carter arrived as defensive coordinator, Lake Travis’ defense has become just as stingy as its offense has been prolific. With the ball in their hands, the Cavaliers have averaged better than 40 points per game in four of the last six seasons. Over that same span, Lake Travis has allowed opponents only 15 points per game, less than that over the last three seasons, including a measly 14.3 points per game last year.

Lake Travis always wants to improve on past performance, which in this case means the defense must work to become one of the best in school history.

“It’s going to be hard to beat the defense we had last year,” said senior safety Chris Roller after one of the team’s first practices. He sees a way it could happen, though. “I think we just need to come together as a team, as a unit.”

To do that, the Cavaliers must mix in some new blood and overcome a void in the leadership department left by three-year starter Luke Hutton. Those who expect to be leaders this season already understand what needs to be done.

“I noticed that,” said senior James Bailey, the most experienced defender. “I thought, wow, we don’t have Luke. Luke was the guy who would get after guys, be more vocal.”

As a senior entering his third year as a starter, Bailey realizes coaches will look to he and his classmates to lead, not only by example but with their voices as well.

“If we don’t say anything, it comes back on us,” Bailey, who committed to Fresno State over the summer, said. “We get the backlash from the coaches. We’re all seniors, so we need to step up and be who we need to be, the leaders of the team.”

As the team went through 11-on-11 work in early practices, the defensive coaches – coordinator Randall Edwards, line coaches Kevin Halfmann and Robert Rayos – pointed out corrections and drove home the need to use speed. And if the three position coaches weren’t enough, Carter himself, the former defensive coordinator, spent most of his time with the defense as well, demanding harder work and better effort. The players may not enjoy the extra attention in the moment but they understand why the coaches are so tough on them.

“In the end, it will help,” Roller said. “You hate it at the time but in the end it will make us better. We know he only wants what’s best for us.”

Carter expects that Lake Travis will once again have a lock-down defense, one that emphasizes smarts and speed over strength and size. That’s been his formula throughout his Lake Travis tenure.

“We want to play fast defensively because we’re not the biggest, fastest, strongest team in the world,” he said. “We are very smart and our guys play together.”

The players echoed the coach’s assessment.

“We’re going to rely on speed and intelligence,” Bailey said. “That’s always how it’s been at Lake Travis.”

“Last year we weren’t that big either,” Roller said. “But the thing is that we move so well laterally as a defense. We all attack the ball, swarm to the ball.”

Though Hutton graduated, taking 41 starts over three years with him along with his 2011 championship ring, the Cavaliers have plenty of depth at defensive back. Bailey, who started at rover for two seasons, and Roller return as safeties. They combined for 140 tackles and seven interceptions last year. Junior Robert-Lee Rayos, sophomore Austin Hiller and senior Hunter Greer will figure in the mix at safety, as will Cole Reichle and Erich Streuling, a pair of multi-generational Cavaliers. Tanner Bush returns after starting at cornerback as a sophomore, giving the Cavaliers a strong nucleus with the secondary, and with some of the key players’ versatility, linebacker as well.

“We have more options and depth at linebacker and safety than we’ve had in a long while,” Carter said. “Lot of options and that’s fun.”

One of those options involves senior John Brewer, who started last season at one of the linebacker spots but has the experience and ability to play safety.

“We also looked at John Brewer, who was our starter at Will backer, as a safety in the spring,” Carter said. “That’s where he played as a freshman. John will be on the field for us somewhere against Midway. It could be rover. It could be linebacker. It could depend on the situation and personnel groupings.”

Brewer enjoys being versatile enough to play any role.

With senior Jason York back at linebacker and sophomore Sammy Ochoa stepping into the middle linebacker spot, Brewer’s versatility gives the Cavaliers added experience and options, all depending on the situation at hand. Carter said Ochoa reminds him of Blake Burdette, a big, fast linebacker who could roll up to defensive end when the Cavaliers needed an extra pass rusher.

Carter said senior D’Marcus Lacy returned to the program after a year away and has been playing very well at the corner opposite Bush. Veterans Hunter Greer and Justin Grigg and newcomer Aaron Brown-Nixon will also figure into the plans. Greer can play either corner or safety and Brown-Nixon, the younger brother of Shaun Nixon, can play cornerback or running back, but he’s starting out working with the defense. Bailey said he’s caught his teammates’ eyes already.

“He’s looking pretty good, learning everything,” Bailey said. “Once he gets that down he’ll have no problem fitting in.”

Lake Travis will also be versatile along the defensive front. Senior Feno Pearson returns for his third year as a starter at defensive end. He and junior Tevin Paul will anchor the line. At 6-foot-4, 240 pounds, Paul has the size to play tackle and the speed to play end, where he’ll start most games. Carter will look to them to make plays up front, pressuring the quarterback.

“I thought the last three games of the year Feno played the best football I’ve ever seen him play,” Carter said. “He’s very smart. It’s very rare for him to make a mental error. We expect him and Tevin to lead that group.”

A pair of juniors, Jayden Hutchings and Corbin Pierce, will man the tackle spots. Both are athletic and strong, and Hutchings brings the added element of a running back’s agility. He played running back as a freshman.

“He was like a Jerome Bettis-type runner and I’m excited to have him at defensive tackle,” Carter said. “He’s athletic and extremely powerful, like a bowling ball.”

The Cavaliers don’t have a lot of depth along the line. Junior Garrett Womack will rotate at defensive end when Paul moves inside, and Dylan Doggett will also figure in the mix. Converted offensive lineman Hunter Rhodes played on the defensive line last year and could move over in a pinch.

The Cavaliers have plenty of talented players, but talent doesn’t always trump team. As Carter and Bailey emphasized, Lake Travis’ defensive success remains predicated on teamwork and attention to detail. Establishing chemistry along the lines of last year’s team will be goal one.

“That’s what helped us last year,” Brewer said. “We loved playing for each other. Luke, Hagen [Patterson], Zach [Davies], Mikey [Islava], those guys kind of brought us together. We need to find that on this team.”

Just like in the lab, getting the chemistry right usually brings favorable results.