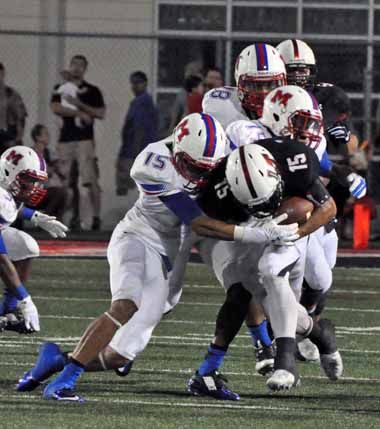 Like Lake Travis, Midway enters the 2015 season with great expectations. The Panthers, after beating Lake Travis to open the 2014 season, ran off 12 consecutive wins before seeing their season end in a strikingly familiar fashion for Cavalier fans. Spring, which knocked Lake Travis out of the playoffs in the Area round in Bryan at Merrill Green Stadium, beat Midway 46-45 the following week in the same place.

Those losses don’t leave Midway’s cupboard bare. Joseph Ward returns to lead an athletic receiving crew. He had seven catches for 89 yards and a touchdown in last year’s game. Eric Clayburn gives the Panthers a breakaway threat in the backfield. He rushed for 96 yards and two scores in last year’s meeting and had 1,700 yards last season. Defensively, the Panthers will lean on Dae Dae Walker and Christian Davis, a pair of DBs who can run with any receiver.

Panthers to Bears, oh my

Midway has become a feeder school for nearby Baylor. In addition to Strickin, who wants to be known as Pooh according to the official Baylor roster, and Jones, five other Midway graduates play for the hometown college. Orion Stewart, a junior safety, played against Lake Travis in the 2011 state championship game. Other Panthers-turned-Bears are DB Justin Barnes, DL Beau Blackshear, TE Lee Bristow and DE Jamie Jacobs.

Roof over their heads

Like Lake Travis, Midway now sports an indoor practice facility. The Panthers’ facility, similar to the Cavalier Activity Center, opened in April, according to a Waco Tribune report. Indoor facilities aren’t the only things the schools have in common. Both have outstanding records over the last five seasons: Midway is 58-9, Lake Travis is 61-8.