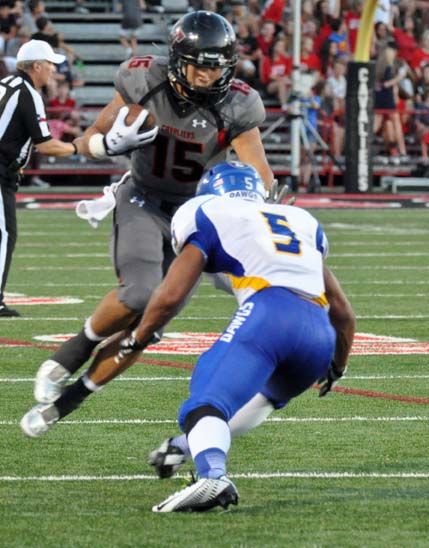 One play into Friday’s game, Lake Travis (2-0) found itself trailing Copperas Cove (0-2) 7-0. But the Cavaliers didn’t trail long. Charlie Brewer passed for four touchdowns and the Cavaliers pulled away for a 56-13 win Friday night in Lakeway.

Kylan Herrera took a flip from Caine Garner and raced 75 yards through the Lake Travis defense on the game’s first play to give the Bulldawgs a quick lead.

“When that happens, yeah, it’s a setback, but we just worry about what’s coming next,” said Lake Travis linebacker Patrick Medina, who finished with two sacks of Cove quarterback Caine Garner.

Brewer went to junior receiver Mac Humble three times on an opening drive that ended with a 16-yard touchdown pass to Green.

“It felt good to get the offense moving on the first drive and finish with a touchdown,” said Humble, who finished with a career-best eight catches for 67 yards. “The linebackers weren’t going to cover the flat and that left me open.”

Charlie Brewer’s 20-yard touchdown pass to Cade Brewer followed. Dicker added field goals of 44 and 30 yards. Leading 20-7, Lake Travis scored twice in the final three minutes of the half. Willows broke loose for a 71-yard run, and Barkley took a short pass 28 yards for another score, atoning for a fumble earlier in the quarter that wasted a 92-yard punt return from Hudson Fife.

Head coach Hank Carter liked what he saw at times, especially from the offense.

“I thought our receivers played well,” he said. “I thought our running backs played well. Charlie had a good game. Cade Brewer probably doesn’t even know his potential. He’s got some unique abilities. It was good to see him make some good catches and some vicious blocks. And after he makes the catch he’s a handful to get on the ground.”

Despite the big victory, though, the coach saw plenty to fix as the Cavaliers move into District 14-6A play.

Aidan Estrada, starting his second game at linebacker, led the way with 13 tackles, but the defensive front, which Carter had hoped would dominate throughout the season, registered just 15 tackles between them. Cove registered 311 yards of offense and had a 92-yard kickoff return to boot.