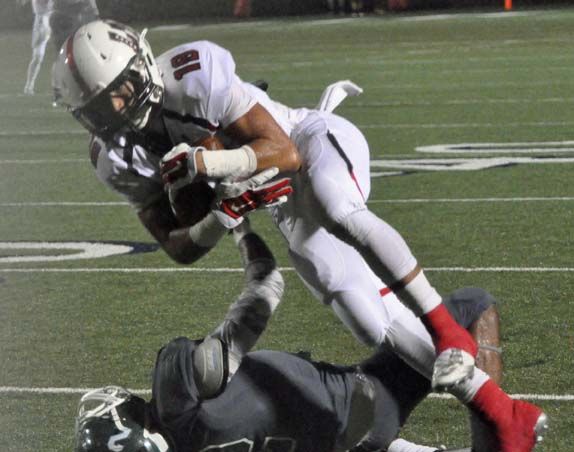 Lake Travis football fans will get one last, first look at the 2015 Cavaliers Friday as part of the annual Spring Jamboree.

The Cavaliers hope that the coming season will end in a large stadium in one of the state’s biggest cities, and much of the work that’s gone on during spring practices has been designed with that end goal in mind. But fans won’t see the result of that work Friday.

“This is probably not the answer that the fans would want to hear, but we accomplish more of [getting on the path to a championship] in practice than we will on Friday,” head coach Hank Carter said Tuesday.

Carter’s goals for Friday remain simple: get in a good, competitive scrimmage and get out as healthy as possible.

“We’re as healthy as we’ve been to this point, so let’s continue that,” he said. “We’ll get everybody a chance to get out there and play.”

Though the Cavaliers won’t showcase the entire playbook, Carter hopes they’ll see an explosive offense that can utilize any number of weapons to accomplish whatever it wants whenever it needs. All of the players coaches expected to stand out this spring have. Quarterback Charlie Brewer, running back Abe Willows and receivers Cade Green, Maleek Barkley, Mac Humble, Carson Pepe and Cade Brewer have all given the defense fits.

“Offensively, I think we have the chance to be that type of team to impose our will,” he said. “If we want to fling the ball around 45 times regardless of what [the defense] is doing, we can. If we need to line up and just mash it down somebody’s throat, [we can].”

Carter’s especially pleased with the development of running backs Aaron Brown-Nixon (moved over from corner) and Santiago Villegas, who could play alongside Willows or give him a break. Keeping Willows fresh to maximize his impact will be a key this fall.

“We have more depth at tailback than we’ve had probably ever,” Carter said. “We’re excited about that. It totally changes us. Last year Abe was our offensive MVP, and not just because he got that award. We weren’t near the same type of offense when he wasn’t in there, so what we’re hoping is that we have some guys who can spell him some.”

The offense has been healthier than the defense this spring, and the large returning nucleus of skill players has given it the upper hand over a defense that won’t have all of its pieces in place until the fall. Two potential starters, safety Austin Hiller and cornerback Hudson Fife, are still tied up with the baseball team, and others including Jayden Hutchings, Corbin Pearce and Aiden Estrada have missed time due to injury.

The annual Jamboree gets started at 4:30. The football scrimmages begin at 5:30 with the freshmen. The junior varsity will scrimmage at 6:30 and the varsity will wrap things up at 7:30. If the weather gets bad, the scrimmages will move from the stadium into the turf room at the adjacent Cavalier Activity Center.

In addition to the scrimmages, fans can sample food at the Taste of Lakeway food court, and Bucky Godbolt and Erin Hogan from 104.9 FM the Horn will be broadcasting their afternoon talk show from the stadium. There will also be a punt, pass and kick competition for future Cavaliers set for 5 p.m.