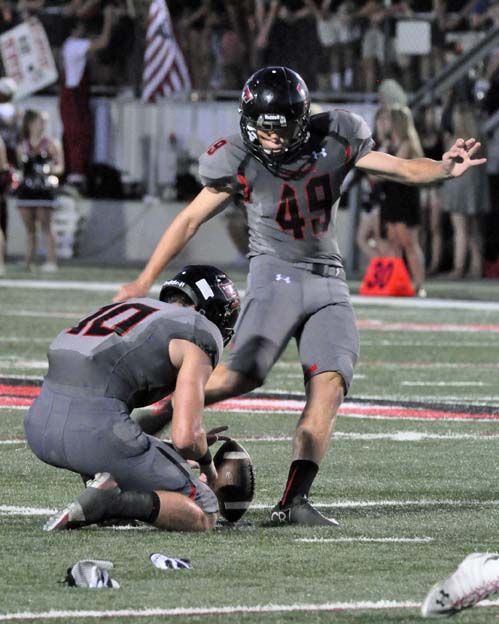 In Dicker, Cavs have another kicking weapon

Dicker, a sophomore who made enough kicks to win a three-way competition to become Lake Travis’ starting kicker this fall, has kept on making them, much to the delight of his coach. Inside of 50 yards, which includes seven field goals and 34 extra point attempts, Dicker’s yet to miss.

“Cameron has the ability and the physical tools and stature that the sky’s the limit for him as a kicker,” head coach Hank Carter said Monday.

Carter sees the sophomore – the first sophomore to win the kicking job in at least a decade – as someone who could rise right to the top of a decorated list of Cavalier kickers. Kramer Fyfe (2009) and Stephen Pyle (2010) both earned first-team all-state honors while kicking on state championship teams. Dicker’s predecessor Brannon Satterfield earned third-team all-state honors last season.

While Dicker’s the next in line, he’s quite a bit different from his predecessors, Carter said.

“He’s a unique talent and I can’t say that we’ve ever had anyone like him at this stage of their development during their high school career,” Carter said. “[One] thing is his stature. He’s a big kid. Most of them haven’t been real big kids.”

At 6-foot-1 and approaching 185 pounds, Dicker’s a good 20 pounds heavier than Fyfe or Pyle. Then again, he’s always been a little bigger. Dicker’s family moved from China to Lake Travis for his sixth grade year, and by seventh grade he made his way onto the football field at Lake Travis Middle, though not so much as a kicker.

“In seventh grade I was starting left guard actually and I wasn’t very much of a kicker,” he recalled. “Eighth-grade year was when I became a full-time kicker. I didn’t really play any other positions.”

Carter recalls seeing Dicker as a middle schooler – regularly sending his kickoffs into the end zone. He also remembers one of Dicker’s kicks that didn’t make it to the end zone last season as a freshman.

“He had a phenomenal freshman season and the biggest takeaway for me, other than him just kicking the ball into the end zone a lot, which is rare for a freshman, was that he made what I thought was the biggest hit of the whole season on a kickoff,” Carter said. “They broke one and he nailed the guy on the sideline. I’ll never forget that. I remember it clear as day.”

Prior to this season, those makes (Jeff Lynn’s 51-yarder in 1998 and Kevin Marcotte’s 50-yarder in 2012) may be the only attempts. Dicker’s tried twice, and suffered his only misses, from 56 yards against Austin High and 53 yards against Bowie.

“The other night he reminded me of my golf swing,” Carter said. “He just overswung a little and came across it. If there’s no wind into his face, I feel pretty good with him kicking from 53, 54, 55 yards. That’s in his range.”

“I think I can make those,” Dicker said. “I have just been nervous when I’ve been out for those kicks. When coach talks to me he sees that I’ve rushed it.”

Dicker tries to take nerves out of play. An Olympic Development Program soccer player, Dicker’s already been on some big stages in the other football world. As a fifth grader living in China, his team played in Beijing, Malaysia and Singapore. He’s played in tournaments around the U.S. and also in England, where his U.S. Revolution travel team took on teams from Ireland, England and elsewhere.

“We didn’t do very well in the tournament,” he admitted.

Carter thinks Dicker’s background and soccer experience have helped him, including a call-up to the Lake Travis varsity during last year’s playoff run to the regional finals.

“He’s been in some huge moments in soccer,” Carter said. “He’s only a sophomore. I understand that. But he plays on a highly competitive club soccer team. He just rolls out there and kicks it when the time comes. It hasn’t fazed him a bit.”

Dicker agrees that last year’s soccer playoff run helped get him prepped for the football season.

“I kind of feel like last year, when I got called up to play with the varsity during the playoffs, helped me a lot because I got experience being in a varsity [competition],” he said. “I got to play in the regional semifinals for something like 10 minutes and then I got to start the regional final. That got a lot of the nerves about playing varsity sports out of my way.”

Another Lake Travis playoff run starts next week. Carter understands that as opponents get better, games will get tighter, and a playoff fate could hang in the balance of one swing of Dicker’s right leg.

“He’s got a really strong leg,” he said. “It’s a weapon as the games get tighter. He can help us down the road.”