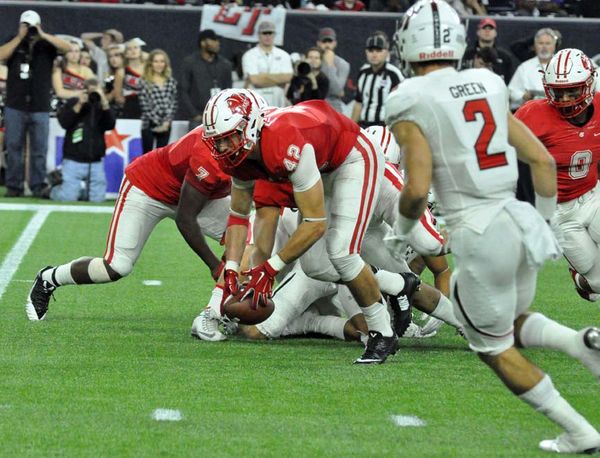 Three first-half Lake Travis turnovers helped Katy to a 17-0 lead, and while the Cavaliers salvaged a late second quarter touchdown to take some momentum – and hope – into the locker room, Katy’s defense proved too tough to crack.

“We turned the ball over there and we didn’t play well tonight,” Lake Travis coach Hank Carter said afterwards. “To their credit, they are a big reason for that.”

The turnovers erased a promising Lake Travis start. Behind completions from Charlie Brewer to Cade Green and Mac Humble, the Cavaliers marched quickly to the Katy 13. Scrambling on third down, Brewer’s pass to Maleek Barkley bounced off the receiver’s hands and J.R. Blades intercepted it.

That interception, just Brewer’s fourth of the season, led to a Katy field goal, and the Cavaliers continued to move the ball with short passes. Brewer completed eight of his first 10 passes for 79 yards. But Katy began turning up the pressure, and for the first time all season, the Cavaliers buckled.

“They brought a bunch of blitzes off the edge and we didn’t handle it well,” said Green, who still made a game-high seven catches for 116 yards. “We prepared all week, and when it came to game time we ….”

Katy consistently put Brewer on the run, never allowing the quarterback time to set his feet. Constant pressure from blitzing linebackers JoVanni Stewart (2 sacks, 3 tackles for loss) and Hunter Stinson chased the quarterback off his spots and put the Cavaliers in a bind. Katy registered four sacks and 11 tackles for loss on the night.

On third and 24 from their own 22, Brewer couldn’t handle a snap. Katy’s Paddy Fisher beat the Cavaliers to the loose ball and returned it to the Lake Travis five, setting up Kyle Porter’s short touchdown run.

Katy’s defense struck again on Lake Travis’ next possession. Under pressure from Stinson, Brewer threw an ill-advised pass that defensive tackle Michael Matus intercepted and returned for a touchdown and a 17-0 Katy lead.

In a 26-second span, Lake Travis dug itself a huge hole it couldn’t escape. Very simply, very quietly, after the game, Brewer said his play put the Lake Travis defense in tough spots.

“It started with up front, and then I didn’t play well,” said Brewer. “…You can’t do that against a good team.”

The Cavaliers managed a touchdown late in the half – a 12-yard pass from Brewer to Green -- and took some momentum into the locker room.

“We felt great at halftime,” Green said. “We’re a team. We can rally around little plays like that.”

“In the second half we didn’t make enough plays early offensively to make them get out of just handing it off and punting,” he said. “We picked a bad night not to have our best stuff. That’s a heck of a team and I want to make sure I give them credit.”