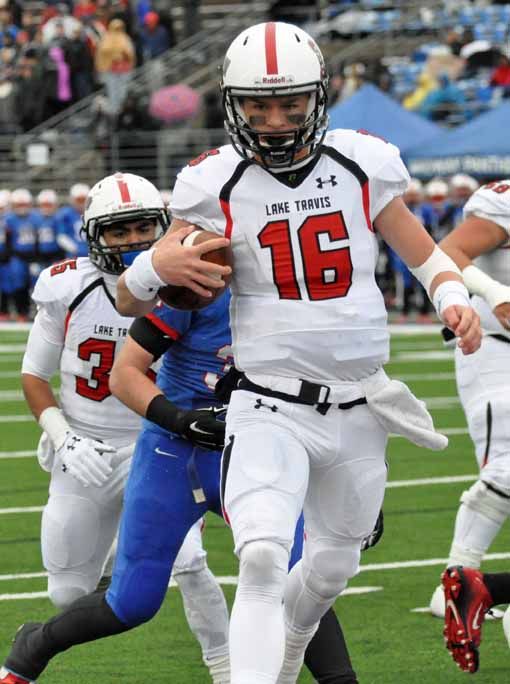 It took the better part of three months, but Lake Travis quarterback Charlie Brewer finally made a mistake.

Fortunately for the Cavaliers, Brewer’s miscue came in the safety of coach Hank Carter’s office Monday morning. His last mistakes came against Del Valle, way back on Sept. 25. While talking about the upcoming state semifinal game against Mansfield, Brewer inadvertently sold his senior teammates short.

“We haven’t been this far in a while,” Brewer, who’s thrown 238 passes since his last interception, said. “No one on our team has been here.”

“Except for us,” senior captain Tevin Paul, sitting on a couch beside fellow captain Jeff Gibbs chimed in. “We played Cedar Hill in the final four.”

That game took place in 2013 – in Waco but at Floyd Casey Stadium.

“It seems like forever even though it wasn’t that long ago,” Carter said.

Saturday the Cavaliers head to Waco ISD Stadium to battle Mansfield for the right to go to Houston’s NRG Stadium next Saturday night.

Brewer was just a freshman when Lake Travis last played a semifinal, far from the polished junior who’s played with a razor sharp efficiency that gets Lake Travis’ offense into the end zone early and often. Since that Del Valle game, where he threw both of his interceptions, Brewer’s completed 68 percent of his passes for 2,039 yards and 24 touchdowns while adding another 441 yards and eight touchdowns rushing.

Behind Brewer’s arm and legs, Lake Travis wasted no time turning a 3-0 deficit into a 21-3 first-quarter lead at Kyle Field against Rockwall. Over the course of five snaps, Brewer delivered touchdown passes to Cade Brewer and Maleek Barkley and added a touchdown run of his own.

“Our kids are executing,” Carter said. “We’re playing great. Charlie has done a real good job running the offense and he gets a little better every week.”

Brewer is quick to pass the credit off to his teammates.

“We start well up front with the blocking,” Brewer explained. “That lets us set up our passing game with our running game. When we block well, it opens up our whole playbook. Our receivers have more time to get open, I have more time to throw the ball. Really, it just opens up everything.”

The fast start also kept Rockwall from relying solely on running back Caleb Broach, not that the Yellow Jackets tried anything different. In the end, they rushed the ball 54 times and threw 31 passes, dominating time of possession while falling well short on the scoreboard.

That’s a formula Lake Travis will be happy to emulate this week against Mansfield, which features a dominating running back in Kennedy Brooks. Brooks has carried the Tigers so far, racking up more than 3,300 yards rushing and 40 touchdowns on 400 carries. He rushed for 187 yards in a 44-7 quarterfinal win over Guyer, his first sub-200 yard rushing game since early October.

“Great running back and a really big offensive line with lots of speed at receiver,” Carter said about the Tigers. “They’ve had some big wins this year. They’re going to be pretty tough, obviously.”

Defending Brooks has been at the top of Carter’s – and defensive coordinator Ryan Luedecke’s – mind since Saturday. They’re weighing options to help bolster the run defense.

“If we’re going to do some things to try to limit what their back can do, it will leave us a little more exposed,” Carter said. “We need to pick and choose our opportunities with that.”

The Cavaliers understand that if they allow Brooks to get loose, Mansfield can limit Lake Travis’ opportunities for possession. The Cavaliers ran just 45 offensive plays against Rockwall but still managed 45 points. Saturday could put them in that position again.

“It means that every time we get the ball we need to try and score,” Brewer said. “You need to make the most of every possession when you play this type of team.”

Another fast start will go a long way toward that. Those fast starts – Lake Travis has had sizeable first half leads in each playoff game – make it difficult for opponents to stick with their original game plans.

The semifinal trip is Lake Travis’ seventh overall but second since moving up from 4A in 2012. With the finals in sight, the Cavaliers know they can’t afford to look ahead no matter how excited they get.

“It’s exciting but at the same time I think everyone knows what we have to get done this week,” said Gibbs. “We’ve lost in the fifth round before. To get this far and not get to the state championship would be a major disappointment for everyone on the team. I think that everyone’s pretty locked in right now at the task at hand. We’re focusing on this game right now more than we are on the one next week.”