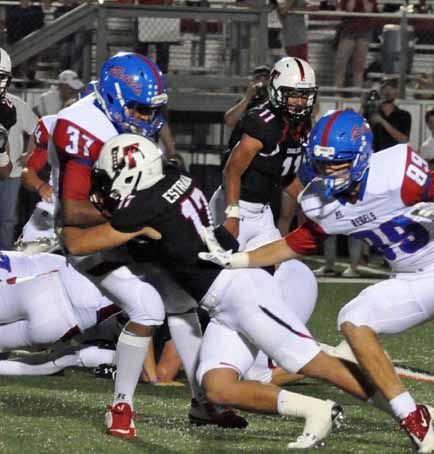 Once inexperienced, linebackers getting up to speed,..and quickly

Three weeks into the football season, Lake Travis may have answered one of its biggest preseason questions.

Strong linebacker play has always been a staple of head coach Hank Carter’s defense. Quinton Crow and Austin Williams dominated the middle on championship teams, and tandems including Blake Burdette and Corbin Crow, Hagen Patterson and Jason York to York and John Brewer, all left their mark leading the defense.

York and Brewer, both three-year starters, graduated last season, leaving a normally dependable unit with questions about who would step in – and step up. So far, juniors Aidan Estrada and Mateo Lopez have risen to the challenge.

“It’s been them studying, that’s what it boils down to, really,” Carter said Monday. “They studied our opponent and had a good week at practice and Friday was evidence of that.”

Estrada and Lopez combined for their best game of the season in the Cavaliers’ 49-13 win over Hays. The starting defense gave up one score – a 69-yard touchdown pass in the first quarter – but otherwise held the Rebel offense in check.

“We had a lot of preparation,” Estrada said following the win. “There was a lot of planning involved. We all executed pretty well and it turned out to be a good game.”

Lopez made a team-high 11 tackles, including two in the backfield, while Estrada added 10, reaching double figures in tackles for the third time. On the season, he’s the Cavaliers’ leading tackler with 34 in three games. Lopez ranks third on the team with 28 tackles, including 10 against Waco Midway in the opener.

“The linebackers and the front four, along with Patrick Medina, made a huge step forward,” Carter said. “The biggest thing is that we want to see our kids fly around like they did defensively on Friday night.”

While Carter felt it might just be a matter of getting used to extended playing time – Lopez played in all but one of the team’s games as a sophomore in 2014 – before the new starters established themselves, he’s excited with the pace at which they’ve grown into their roles.

“It’s been them studying, that’s what it boils down to, really,” Carter said. “They studied our opponent and had a good week at practice and Friday was evidence of that.”

That has allowed their athletic ability to begin to take over as well.

“They are both extremely talented kids,” Carter said. “They have the physical tools. The thing with them is that they have got to learn how to play, how to line up and how to fit. They are good athletes, so we were able to play fast the other night.”

Estrada agreed. The time he, Lopez and the rest of the defense has spent with Carter and new coordinator Ryan Luedecke has started to pay dividends, and the players hope to see results that resemble Friday’s more and more.

“The first game, it was a little new, but we got good coaching by Coach Luedecke and good preparation,” Estrada said. “Tonight opened up a little more for us. I think we still have a little work to do on our planning, but it felt pretty good.”