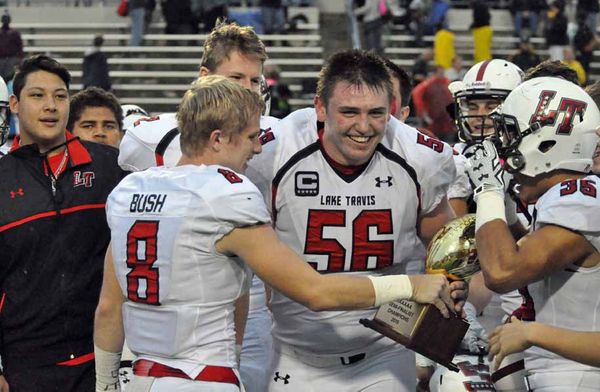 The Road to NRG: Lake Travis

Pflugerville won a coin flip to break a three-way tie for District 13-6A’s final playoff spot and then won the coin flip to open the game. That turned out to be the Panthers’ bright spot.

Santiago Villegas and Maleek Barkley rushed for two touchdowns each, Charlie Brewer tossed a pair of touchdown passes and the Cavalier defense recorded its fourth shutout of the season, allowing just 123 yards of offense in the 48-0 win.

The two highest ranked teams in Region II met in the second round on a windy Saturday afternoon in Brenham. Lake Travis took a 28-7 lead into the fourth quarter and held on despite a furious Westfield rally.

Behind Dillon Sterling-Cole, Westfield closed the gap to 28-21 and had the ball with a last chance to tie. Steling-Cole tried to connect with Joshua LeBlanc, but Lake Travis safety Robert-Lee Rayos intercepted the pass to clinch the Cavaliers’ win.

Meeting for the second time, Midway still had no answers for the Cavalier attack. Sparked by Maleek Barkley’s 197-yard, three-touchdown rushing day (he added another touchdown catch), Lake Travis broke open a close game and cruised to the 55-14 win in Temple.

For the second straight week, Lake Travis falls behind only to click things into high gear and cruise to a win. Mansfield opened the scoring when all-state running back Kennedy Brooks scored from nine yards out. From there, the Cavaliers scored 35 straight points, sparked again by Maleek Barkley, en route to the 49-21 win.

Charlie Brewer passed for 323 yards and four scores, caught another touchdown pass and got the Cavaliers on the board with a 1-yard run midway through the opening quarter. His 52-yard rainbow to Barkley came after Tanner Bush recovered a fumble, and he added scoring strikes to Cade Brewer, Barkley and Cade Green as the Cavaliers made Brooks’ 170 rushing yards nearly irrelevant.