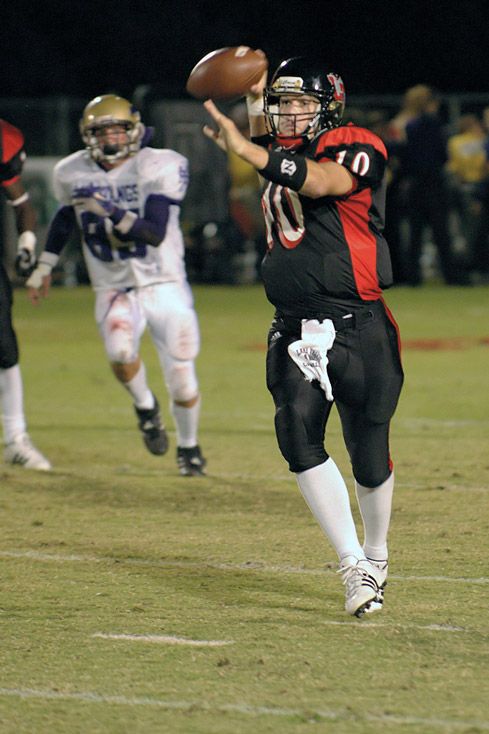 The Cavaliers upset Pflugerville Connally 21-14 in Lake Travis’ first ever playoff game. In another first, the Cavaliers score on their first snap. Cody Skaggs used a play-action fake to get the Cougars’ safety out of position and then hit Jared Quick over the top for a 63-yard score on the game’s first play.

After a perfect regular season, Lake Travis finds itself on the ropes in the bi-district round against Alamo Heights. A late penalty kept Alamo Heights from icing the game and Todd Reesing picked the Cavaliers up off the deck with a late drive. He found Fred Robinson for a big gain and drove the Cavaliers to the Mules’ doorstep. At a timeout prior to the deciding fourth-and-three play, Reesing demanded the ball and coach Jeff Dicus gave it to him. With the season on the line, Reesing ran quarterback sweep in for the score and the Cavaliers survived 24-21.

After seeing a 48-game winning streak snapped earlier in the season against Aledo, the Cavaliers fall to Cedar Park in the regular season finale. The 35-21 loss, in which Lake Travis fell behind 21-0, ended a 48-game district winning streak that dated back to 2004. The Cavaliers got the ultimate revenge, though, topping Cedar Park 21-20 in the regional finals en route to state title number four.

One year after dropping the regular season finale at home to Cedar Park, Lake Travis ventures up Ranch Road 620 and returns the favor. Colin Lagasse’s long touchdown run sparks the Cavaliers to a big lead and the defense holds on for a 24-21 win. Lagasse had 206 yards rushing and receiving, nearly two-thirds of the Cavaliers’ total.