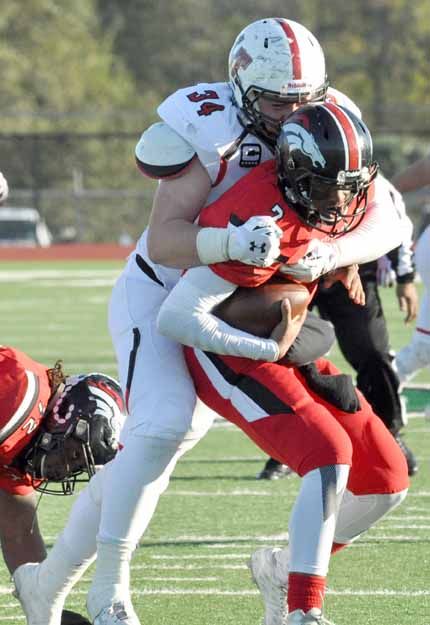 TMQ: Where have all the defenses gone?

“It’s supposed to be hard. If it wasn’t hard, everybody would be doing it. The hard is what makes it great.” Jimmy Doogan (Tom Hanks), A League of their Own”

Pick a quote, any quote, as it relates to sports and playing defense. The best one, especially as it applies to football today, remains “Offense sells tickets, defense wins championships.”

Ask any of the eight head coaches whose high schools still have their sights set on hoisting the 6A, Division II championship in three weeks, and they’ll no doubt say the same thing. Trouble is, though, fewer than half the teams remaining pay more than lip service to the saying.

This weekend marks regional finals between Lake Travis and Rockwall, Denton Guyer and Mansfield, Katy and Manvel and Steele and Clemens. While all eight schools feature offenses that average at least 36.8 points per game, only three allow less than 14 points per game. Steele allows 12.1 points per game, Lake Travis allows 10.5 points and Katy, which has given up just 38 points all season, allows 2.9.

Those three teams, according to MaxPreps, are the top ranked teams in Texas. MaxPreps ranks Katy first, Lake Travis second and Steele third. That fact isn't lost on the players involved.

“[Playing defense] makes us an outlier,” said Lake Travis safety Austin Hiller. “Steele, Katy and us are three teams people are considering to win the state championship because we’re balanced.”

“There aren’t any teams left who feel good about giving up 30,” said Lake Travis coach Hank Carter. “People are scoring points these days and it’s as difficult as ever to play defense.”

So what makes Lake Travis – along with Katy and Steele – successful at defense when others have struggled? Part of it could be competition – district opponents for both Lake Travis and Katy maybe haven’t been as tough as in years past or teams in other districts. But most certainly, at least at Lake Travis, part of it is coaches who are willing to take athletes away from offense and commit to building a defense that can be just as stingy as the offense can be prolific.

“We want to be as good at offense, defense and special teams as we can in every single game,” Carter said. “We take a lot of pride in what we do on the field and our kids just need to keep doing it.”

That hasn't always been the case at Lake Travis. In building his program after taking over in 2003, Jeff Dicus sent his best athletes to the offense. It worked, but the Cavaliers were far from dominating on both sides of the ball. Dicus' 2007 championship team scored 38 points per game but gave up 21.8.

It may not be as simple as taking great athletes and putting them on defense. Lake Travis has its share of talented, athletic players, but so do the other remaining teams. You don’t make it to the state quarterfinals without talent. Steele, Katy, Manvel and Guyer all send plenty of players to Division I football, maybe more than Lake Travis does. So why has Lake Travis -- and Katy and Steele -- been able to get the defense to match its offense while others have struggled?

Lake Travis’ defensive track record doesn’t hurt either. Since Carter arrived with now-SMU coach Chad Morris to run the defense in 2008, the Cavaliers haven’t finished a season allowing more than 16.8 points per game. Carter’s defenses – and those of Randall Edwards and now Ryan Luedecke since Carter became head coach – have consistently allowed 14 points or less. Players see that success and buy in quickly to the scheme and the coaching.

“If we stick to our game plan – and our coaches usually have a good game plan – we’ll be okay,” said defensive back Tanner Bush, a three-year starter and captain.

Coaches feed off the trust they receive from the players.

“We feel like the plan that we have and the way that we coach our kids is a winning formula,” Carter said. “Our kids have a lot of faith in that, and even if we’re struggling we’ll have the answer. We just have to find it and put it into place. It helps that the kids have a tremendous amount of confidence in what we do.”

So, about that plan. How, exactly, do the Cavaliers routinely keep opponents well below their season average? Westlake, still alive in the Division I regional final, scored just 14 against the Cavaliers. The Chaps average 43.2 per game. Only Bowie, which got 27 against Lake Travis, has come within a touchdown of its usual scoring output of 34.2.

“First, let’s line up right, and that sounds really simple, but it’s not,” Carter said, citing games he sees on Saturday and even Sunday where defenses often find themselves out of position at the snap. He calls this making sure teams don’t get “beat by birth.”

Early on this season, getting lined up proved challenging for his team, too. Lining up correctly isn’t just plugging correct gaps or shading a safety to one side or the other. For Carter, lining up correctly means understanding that week’s plan, committing to it and then making sure players are in the right spot.

“Let’s line up in a way that gives our kids an opportunity to play fast and limit the things that are easy for opponents to do,” he said.

If the players get themselves into the right spot, the second part of the process falls on the coaches. Once the chess match begins and the offense adjusts to how the defense lines up, the defensive coaches must make their adjustments as well – and get those adjustments communicated to the players.

“Once we get into the game, then we need to make our adjustments and get that information to the kids,” Carter said.

Hard to argue with the results.

“So far we’ve done a pretty nice job of it,” Carter said.