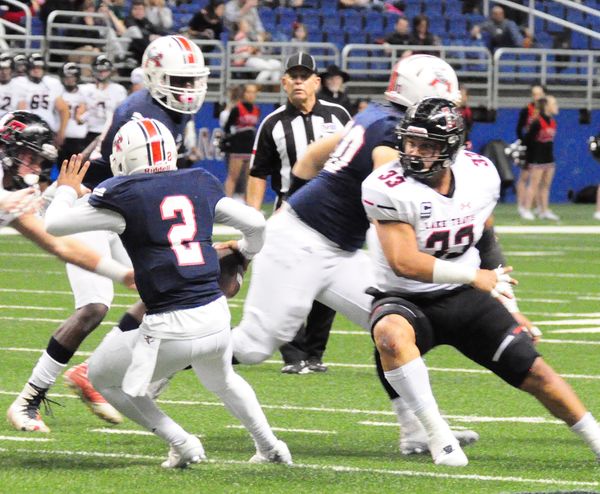 Heading into Saturday’s 6A, Division I semifinal, Lake Travis players knew Humble Atascocita’s Daveon Boyd could – and would – throw early and often, and they were right.

Atascocita took the opening kickoff and Boyd went to work quickly, completing six straight passes while driving the Eagles 85 yards for an opening score, putting the Cavaliers in an early, unfamiliar 7-0 hole. The deficit, and Boyd’s success, didn’t last long.

“They scored early and it looked like it would be a tough game,” Foster said. “But I felt confident we would come back and finish it off.”

With its 85-yard drive to open the game, Atascocita became the first team to score against Lake Travis in the opening quarter since Dallas Jesuit back on Sept. 9. After the early success, the Eagles managed just 95 yards the rest of the half.

The Cavaliers, for the 14th week in a row, scored on their opening possession to match tie the game, then took control when the defense forced a three-and-out on the next possession. When the offense handed them a 14-7 lead, the defense responded with two quick turnovers – a fumble recovery from Michael Mast and an interception from Foster – that the offense turned into scores and a 28-7 lead.

“We know we can hold down to 21 points or less, our offense will do its thing,” Foster said after making his team-leading third interception, breaking up a pass and making a handful of tackles on the night.

The offense did its thing – scoring 56 straight points as the Cavaliers sprinted toward next Saturday’s championship game with a 63-21 win. The defense came up with four turnovers in all – T.J. Simien and Mateo Lopez also recovered fumbles. Lake Travis has forced seven turnovers in the last two games.

“We preach it like crazy,” Cavaliers coach Hank Carter said about the turnovers. “We have told them a million times to get their hands up, get the ball out, and the kids are buying into it. It’s a good job by them.”

Though Boyd and the Eagles racked up yardage – 391 passing yards – the bulk of it came after Lake Travis had stretched its lead to 56-7.

“I thought we did pretty well, secondary-wise,” Carter said. “People can throw and catch the ball these days, so you’re not going to hold them down forever. The quarterback was as good as advertised and the receivers were as well.”