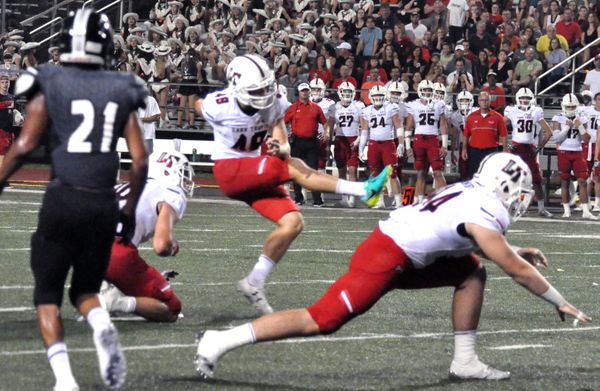 After missing two field goals against Converse Judson, Cameron Dicker itched for an opportunity to bounce back.

Against Cibolo Steele, did he ever. Dicker made all three field goals he tried, none bigger than a 46-yarder with two seconds left to force overtime. His 29-yarder in overtime proved to be the winner in a 59-56 thriller.

“This was a lot better than last week, missing those two,” Dicker said. “It was great for me to bounce back.”

Dicker missed two short field goals – from 31 and 34 yards – against Judson but converted from 37 yards in the third quarter against Steele, extending Lake Travis’ lead to 39-35. With Steele leading 49-46, Dicker knew he may get another chance at a big kick, even as he watched backup quarterback Matthew Baldwin step in for the injured Charlie Brewer.

“I knew that Matthew would get what he needed to do done,” Dicker said. “I knew everybody believed in me and I was just ready to make that kick.”

Baldwin delivered, moving the Cavaliers from their own 20 to the Steele 29 with seven seconds left. Dicker jogged onto the field and drilled the longest field goal of his career, splitting the uprights with plenty of room to spare.

“We have a great kicker and he came through,” Baldwin said.

While most will remember the tying and winning field goals, Dicker’s biggest kick may have been a punt. On the fourth down following Brewer’s injury, Kyle Wakefield’s snap sailed over Dicker’s head into the end zone. Rather than take a safety, Dicker gathered up the loose ball, saw he had room and got enough of a punt away for the ball to roll dead at midfield.

A soccer player rather than a football player who can also kick, Dicker isn’t used to the idea of a player who’s fair game to tackle.

“I was thinking ‘oh shoot, somebody’s going to hit me,’“ he said. “I picked up the ball first, made sure I had it and was ready just to knock it out of there.”

Dicker also understood his team’s predicament and, in the moment, knew he couldn’t do what coaches often tell punters to do in that situation: take a safety to avoid a greater disaster. Dicker realized a safety would give Steele the ball back against a weary defense that struggled to stop the Knights all night long.

“We’ve worked on that in practice before,” he said of the decision to kick the ball. “I knew where we were and I knew I needed to get it out of there.”