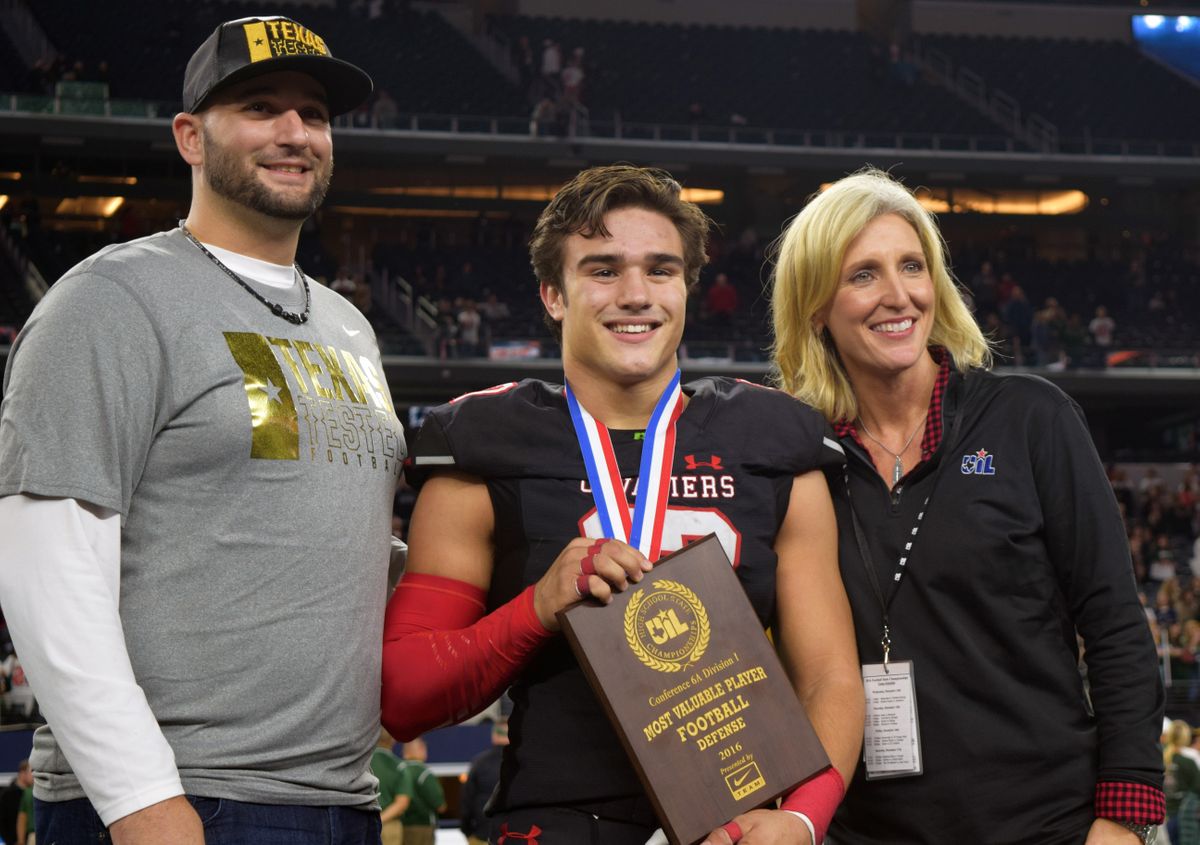 From Charlie Brewer’s record-setting quarterback play to Maleek Barkley and Cade Brewer combining for four title game touchdowns after dismal performances in the 2015 championship game against Katy, the Lake Travis sideline had plenty to smile about Saturday night in Arlington.

But no Cavalier had coach Hank Carter smiling more than did senior linebacker Aidan Estrada, who capped a tumultuous senior season with an MVP performance. Estrada’s early stop of Carlos Ramos set the tone, and his interception later in the quarter led to a touchdown and a 20-0 lead as the Cavaliers never looked back.

“It’s an even better feeling because I know I overcame something to be here,” Estrada said after the game. “It’s a great feeling knowing that I kept pursuing something, my coaches kept backing me up, helping me through things so that at the end it was a great feeling.”

Coming off a junior season that saw him make 162 tackles and help the team reach the title game only to fall to Katy, Estrada was eager for another chance.

“Last year I felt crushed because we worked so hard for something and gave it up so easily,” he said of the 34-7 loss to Katy. “But I also felt like we had to get back to business, working at it so we could come back this year.”

Lake Travis returned 17 starters, all of whom seemed destined for big seasons, but the big season never materialized for Estrada, at least not personally. He missed the opener, changed positions from linebacker to Rover, and then suffered a concussion against Steele, which forced him to miss the next three games.

He returned to the field for Lake Travis’ 49-7 win over Westlake on Oct. 7. As he rebuilt the confidence that he could avoid another concussion – “You only get one head, so you’ve got to take care of it,” he said earlier – he also dealt with the frustration of not getting calls from college coaches, something that frustrates his coaches, too.

“When you look at our team, it’s hard to find a better all-around football player,” a puzzled Carter said earlier this season.

Estrada put his fear and frustration aside and kept working to regain his form and help the Cavaliers on another run toward the championship game. Then he injured his knee late in the season. Still, he soldiered on, playing around the injury and through the pain, which forced him to the sidelines for significant stretches – he missed the second half of the state semifinal against Atascocita.

The state championship game coincided with first semester final exams, and Estrada said the game essentially became another exam, one he was happy to put in all the necessary studying for.

“Our preparation…it’s a lot every week, but this week it was through the roof,” he said. “We woke up every morning, getting hours of film in, hours of practice. When we were at the hotel [Friday], we kept watching film, coaches kept asking us our assignments, quizzing us. We were basically preparing for a test.”

Leaving no stone unturned, Lake Travis proved ready for whatever The Woodlands tried, on both sides of the ball. If Saturday’s championship game was indeed a test, Estrada and his teammates passed with flying colors.

“This was the best final exam for sure,” he said.