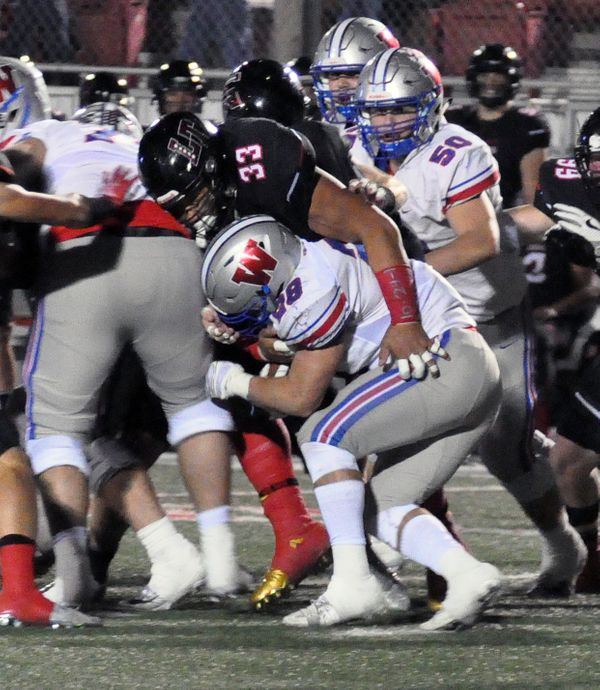 In the days leading up to Saturday’s 6A, Division I semifinal between Lake Travis and Humble Atascocita, the question from Lake Travis fans seemed obvious. How much does the 2016 Atascocita team look like the 2013 team the Cavaliers faced in the playoffs?

After watching film on the Eagles, Lake Travis coach Hank Carter knew the honest answer to the question. He also knew how people might take his answer.

The 2013 Cavaliers grounded the Eagles in convincing fashion, jumping out to a 41-0 lead on a cold, wet and windy day in Bryan before winning 41-16.

“It doesn’t mean the same thing is automatically going to happen,” Carter said. “I’m not expecting that. I didn’t think in 2013 that we would have blown them out. I was beyond concerned with them.”

He’s concerned with them today, too. The 12-1 Eagles knocked off defending state champion Galena Park North Shore last Friday and remind Carter a great deal of the Cibolo Steele team the Cavaliers outscored 59-56 in double overtime in early September.

“Their personnel is similar to Steele, but the way they go about their offense is different than Steele,” Carter said.

Quarterback Daveon Boyd has thrown for 2,411 yards and rushed for another 538, giving the Cavaliers another dual-threat quarterback to contain, similar to Steele’s Xavier Martin and Judson’s Julon Williams.

“We’ve got to keep him in front of us and we’ve got to push the pocket,” Carter said. “We can’t let him stand back there all day either because he’s an excellent thrower and they’ve got plenty of great guys to throw it to.”

The key, Carter said, to containing an Eagles offense that averages 42 points per game will be disciplined aggression and sound coverage.

“The biggest key is that we have to make them drive the whole field,” Carter said. “We can’t give up 25-yard chunks on quarterback scrambles and we can’t let them throw it over our head. And they’ve got some guys who, even when we’re in good position, can jump over us and catch it.”

While the Eagles remind Carter of Steele from an athletic standpoint, he expects his defense will fare better than it did trying to contain the Knights.

“We’re going to play better, I think, than we did back against Steele because we have been playing this defense that much longer,” he said.

Plus, defensive tackle Sammy Ochoa, who missed the game against Steele, has regained the form he displayed prior to the auto accident that cost him half of last season and all of spring practice.

Carter also mentioned junior cornerback Jake Foster, who along with Aaron Brown-Nixon and Nathan Parodi will be tasked with containing Atascocita’s receivers.

“I think Jake Foster has been a huge key for us and has played very well,” Carter said. “We’re going to expect him to continue, along with Aaron and Nate rotating in those spots.”

With explosive talent at quarterback, running back and receiver, Carter expects that the Eagles will put some points on the board. He also expects his team to respond when faced with a challenge.

“They are going to make some plays on us…they make plays on everybody,” he said. “We need to be able to respond to that and make them work.”

The last team to make plays and score with the outcome in doubt was Smithson Valley, but each time the Rangers scored, the Cavaliers responded. When the Rangers cut the lead to 16-7 late the half, Charlie Brewer hit Cade Green for a long touchdown to reclaim momentum just before halftime, and Maleek Barkley answered two second-half scores with touchdowns of his own, including a 54-yarder after the Rangers pulled within 33-21.

One thing about Saturday’s game that won’t remind Carter of the 2013 meeting is the weather. His Cavaliers handled the cold, wet conditions in 2013 much better than the Eagles did.

“I think we handled the weather better than they did that day,” he said. “Our kids threw and caught and got the running game going.”

With this year’s meeting in San Antonio’s Alamodome, both teams will enjoy the 70-degree, perfect conditions. Lake Travis hasn’t played in the Alamodome since 2011 but has won its last nine games there dating back to 2005, including a 2011 semifinal win over Pearland Dawson. Kickoff is 2 p.m.