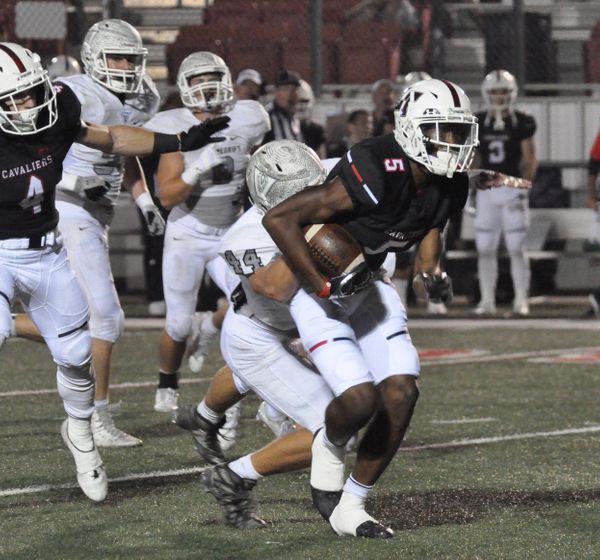 By his own admission, Lake Travis football coach Hank Carter has some very high standards for his football team, and despite a 28-0 halftime lead against Vandegrift Friday night, the Cavaliers weren’t meeting them.

“We were up 28-0 or whatever it was at halftime, but it didn’t feel like we were,” Carter said. “The game felt a lot closer than that. I felt like we played sloppy. Too many penalties, laying the ball on the ground.”

The numbers supported the coach’s feeling. Lake Travis had carved out a 28-0 lead despite a handful of penalties, including back-to-back unsportsmanlike conduct calls on the defense. Even worse, the Cavaliers fumbled the ball away twice, even if one was negated by a Vandegrift penalty.

“We gave them a little spirited talk at halftime and made some adjustments,” Carter said.

The message reinforced the idea that playing well enough to open up a four-touchdown lead isn’t good enough on the eve of the playoffs. And the message got through.

Lake Travis’ defense held Vandegrift to just seven third-quarter yards on three possessions, and Charlie Brewer finished off a near-perfect night with touchdown passes to Mac Humble and Cade Green as the Cavaliers kicked things into high gear, claiming their sixth straight district title by blanking the Vipers 55-0. Garrett Wilson caught seven passes for the Cavaliers, including a pair of touchdowns.

“I’m very proud of how we came out and played [in the second half],” Carter said. “Vandegrift’s a good football team. I’m proud of all these boys. A district championship’s a big deal. When we set our goals at the beginning of the year, that’s one of the things we want to do.”

Lake Travis’ quarterback continued his stellar season, finishing with five more touchdown passes and 242 yards while completing 24 of 25 passes, including his last 23 in a row. He finishes the regular season with 2,305 passing yards and 35 touchdown passes without an interception.

Defensively, the Cavaliers limited the Vipers to just 95 yards of offense and allowed them across midfield just three times.

In tuning up for Friday’s playoff opener against San Antonio Madison (7:30 at Cavalier Stadium), the Cavaliers welcomed Green, Cade Brewer and Maleek Barkley back into the lineup.

“When you’re out a little bit, it takes some time to get back in there,” Carter said.

Brewer hadn’t played since the Cavaliers 49-7 win over Westlake in early October and caught a pair of touchdown passes in his return. Barkley, held out of last week’s game with a sore shoulder, returned to rush for 133 yards on just 14 carries.

““It was really nice to get back,” Barkley said. “I’ve been anxious to get back out there with my team.”

Green also missed last week’s game but returned with a handful of catches including the third quarter score.

“Whenever you have to miss a game, it always sucks,” he said. “It was awesome to get back out here with my teammates and win an important district championship.”

A more important championship sits just over the horizon, and the Cavaliers enter the playoffs as one of the true 6A, Division I contenders. Ranked third in various polls, the Cavaliers head into the playoffs having won nine straight games by an average score of 55-11. Lake Travis hasn’t trailed since week 2 against Cibolo Steele. Opponents have scored more than 10 points just once since September.