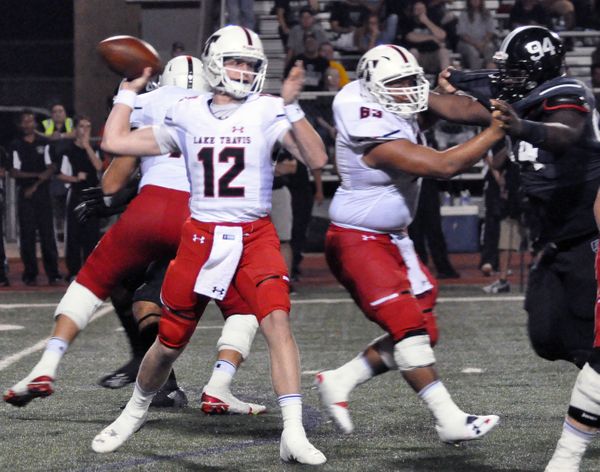 Coaches continually remind players that, if they aren’t a starter, their time will come. The trick for those players is to remain ready when that moment arrives.

Lake Travis junior Matthew Baldwin hadn’t seen the field in two games, but when his team needed him most Fridy night, he came through.

“This is like nothing I’ve ever felt before,” Baldwin said after stepping in with less than three minutes left to lead the Cavaliers to a come-from-behind, double overtime win against Cibolo Steele. “I feel great right now.”

The Cavaliers trailed 49-46 when Brewer rolled to his left, buying time for receivers to come open on a crucial third down. As he let the ball go near the Steele sideline, several Knights’ defenders hit him. Brewer went down in a heap on the Steele sideline and appeared dazed as Lake Travis coaches and trainers took his helmet and walked him back to his own bench.

The situation left Cavaliers’ coach Hank Carter in a quandary. He faced a fourth and 10 from his own 20-yard line with 3:24 left. Led by dynamic quarterback Xavier Martin, the Steele offense had dominated Lake Travis’ defense. Punting the ball back to the Knights seemed problematic, but maybe less so than going for it on fourth and 10, deep in his own territory, with a backup quarterback who hadn’t even had time to warm up.

“Well, we thought about going for it on the fourth down,” Carter said. “That was a long talk. They were going to get the ball, and if they get a couple of first downs, they probably put us to bed. But we wanted to get Matthew at least warmed up a little bit.”

So Carter sent out the punt team. Cameron Dicker avoided disaster when he fielded a snap that went over his head and punted the ball out of danger, at least giving Lake Travis’ defense a chance to stop the Knights. They did, and his teammates helped Baldwin do the rest.

“My teammates are so supportive,” he said. “They got me ready to go. We went out there, did all we could and ended up winning the game.”

“We were able to get the ball back and he took us right down the field,” Carter said. “He was smart with the ball and made some plays with his feet.”

Baldwin completed his first four passes, then faced a huge test on fourth and 12 with 1:24 left. Like Brewer before him, he rolled left and looked for receivers to come open. None did, so he tucked the ball and ran, breaking one tackle and diving through another, checking the spot to make sure he’d done enough to keep the drive alive. He had.

Three plays later, he nearly connected for a huge pass, lofting a ball down the sideline that Garrett Wilson caught but couldn’t stay in bounds. Out of time outs, Baldwin knew he needed either enough for a first down or something on the sidelines to stop the clock.

“Coach [Michael] Wall always tells us to keep our composure,” he said. “He was helping me the whole time there. We wanted to take care of the ball so we made sure I wasn’t making any risky passes. We have a great kicker and he came through.”

Working quickly, he hit Cade Brewer on the Steele sideline at the 29-yard line, giving Dicker a chance to tie the game, which he did.

In overtime, Baldwin hit Cade Brewer again, this time for a 25-yard score to tie the game at 56, then played mistake-free football to set up Dicker’s eventual winning field goal.

“Our kids always impress me, how much they rise to the occasion,” Carter said of Baldwin’s effort. “He did. I can’t say enough about how proud I am of our kids.”