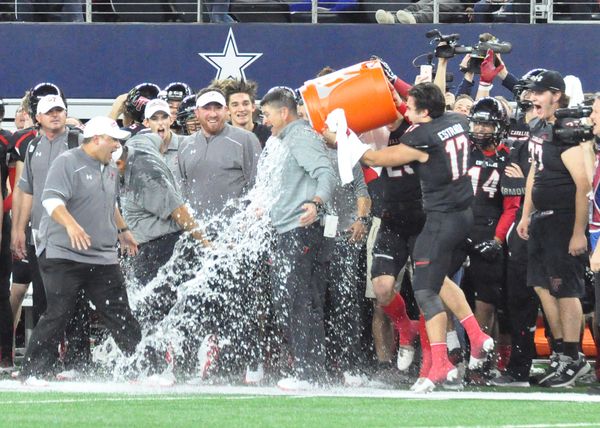 8 days until Westlake: 8 years at state

One of the unique aspects of the Lake Travis-Westlake rivalry is the frequency with which one of the participants – or both – reach their respective state championship games. In the 11 years the game has been played, eight of the matchups have seen at either Westlake or Lake Travis – and twice both – reach the title game. The teams have combined for 10 championship game appearances – and six titles – since they began playing.

After winning its initial title in 2007, the Cavaliers continued to dominate the 4A ranks through 2011. The 2008, 2009 and 2011 titles capped undefeated seasons. The 2010 team also entered the season favored but overcame injuries and two regular season losses to win the championship. Last year’s title team began the season as the consensus favorite and rolled to the title following the season-opening hiccup against Judson.

Westlake’s championship-game runs came in seasons when the Chaps were not considered title favorites. The 2006 team lost a pair of district games and narrowly avoided a third loss to San Marcos in the regular season finale. Even the bi-district playoff against Churchill proved a struggle. Westlake escaped with a 42-40 win and defeated Pearland 35-32 at Kyle Field to reach the title game against Carroll, where Todd Dodge led his former team past his future, 43-29.

In 2009, Tanner Price led the Chaps on a similar playoff run. Westlake lost a pair of regular season games and gutted out a bi-district win over Madison, 31-27. An opportunistic defense helped the Chaps cruise past Judson, Harlingen, Clark and Cinco Ranch to earn a title game appearance opposite favored Trinity. The Chaps kept the Trojans on their heels and scored first in overtime, but Brandon Carter’s one-handed touchdown catch made the Chaps a bridesmaid again.

By 2015, both Lake Travis and Westlake had emerged as 6A powers residing in the same district. In 30 games leading up to championship weekend at NRG Stadium in Houston, the only blemish on either team’s ledger was Lake Travis’ 38-17 win at Westlake. The Chaps reached the Division I title game thanks to Sam Ehlinger’s heroics against top-ranked Allen, and the Cavaliers blew past opponents using their familiar high-scoring, fast-paced attack despite losing two key players – running back Abe Willows and defensive tackle Sammy Ochoa – the weekend of the teams’ regular season meeting. But the CenTex-Houston doubleheader didn’t go Austin’s way. Galena Park North Shore topped Westlake 21-14 in overtime to win the D1 title, and Katy’s record-setting defense stymied Lake Travis 34-7 in the D2 game, proving that the immovable object can top the irresistible force.