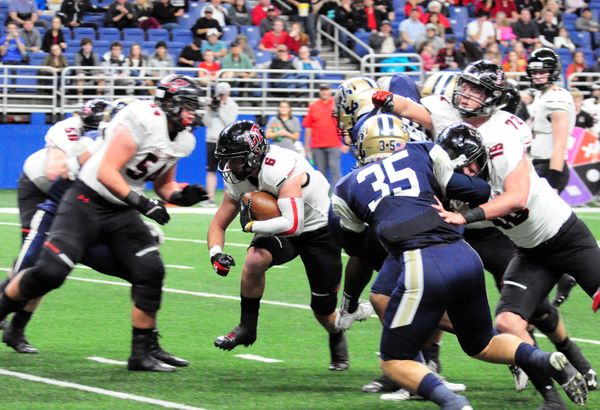 San Antonio – Garrett Wilson caught touchdown passes on both sides of halftime to lead Lake Travis (12-2) past O’Connor (13-1) 38-17 in the Alamodome Saturday afternoon in the 6A, Division I, Region IV championship game.

Lake Travis advances to the state semifinals to face Katy next Saturday. Lake Travis and Katy will meet at 3 p.m. at Alamo Stadium in San Antonio. Katy beat Lake Travis 34-7 to win the 2015 6A, Division II state championship, the last time the Cavaliers lost a playoff game.

Wilson hauled in a 20-yard pass from Matthew Baldwin late in the second quarter and added a 31-yard touchdown early in the third as Lake Travis broke a 10-10 tie.

“I try and do whatever my team asks of me,” Wilson said. “I’m just trying to do my best for my teammates. [O’Connor] is a really good team and we just went out there and did what we were supposed to do.”

“When we get time to throw the ball, we’re pretty tough,” he said. “I thought Matthew played great as well.”

After Wilson’s second touchdown catch gave the Cavaliers a 24-10 lead, Roel Sanchez rallied O’Connor. The quarterback converted two fourth-down runs, including a two-yard touchdown, on a 20-play, 86-yard drive that pulled the Panthers within 24-17.

Taking chances throughout the game, including a fake punt on his team’s first play, O’Connor coach David Malewsky opted for an onside kick following Sanchez's touchdown.

“We had prepared for every bit of that and we still didn’t do a great job with it,” Lake Travis coach Hank Carter said.

The Cavaliers did well enough with O’Connor’s last gamble, recovering the onside kick and immediately responding. Wilson pushed Lake Travis’ lead back to 31-17 with a nine-yard run to cap with 6:50 remaining.

“I was really impressed with some of the drives we had in the second half,” Carter said. “We were able to hold the ball for a while and go down and score. That’s important because it gives the defense time to rest and keeps [the other team’s] hope down a little bit.”

Sanchez frustrated the Lake Travis defense early, escaping onrushing tacklers time and again while rushing for 66 first-half yards, including a short touchdown run that gave the Panthers a 10-7 lead early in the second quarter.

“That’s a credit to him,” Carter said of Sanchez. “He’s an excellent player. There were times when we were rushing him that we were afraid to get all the way to him. Other times, we got too deep and he picked a side to run through. The hardest thing for a defense to do is rush the passer when he’s a good runner.”

Lake Travis changed its defensive scheme slightly and held O’Connor without points on four straight possession from late in the second quarter to midway through the third to create breathing room. Forced to throw the ball in the second half, Sanchez finished with 113 yards rushing on 24 carries. He completed just 13 of 20 passes for 90 yards.

“We were a lot better in the second half,” Carter said. “We played a little bit more man coverage and gave more attention to the box instead of the outside guys.”

Baldwin, who committed to play at Ohio State earlier in the week, completed 22 of 28 passes for 227 yards and two scores. He added a touchdown run. Kyle Wakefield gave Lake Travis a balanced attack, rushing for a career-high 102 yards on 20 carries. Wakefield’s effort marked just the third time this season the Cavaliers have gotten 100 yards rushing from a single player. Quarterbacks Baldwin and Card have the other two 100-yard rushing games.

Lake Travis advances to the state semifinals to face Katy next Saturday. Lake Travis and Katy will meet at 3 p.m. at Alamo Stadium in San Antonio. Katy beat Lake Travis 34-7 to win the 2015 6A, Division II state championship, the last time the Cavaliers lost a playoff game.

As he walked out of the Alamodome, Carter was asked when he’ll begin focusing on the 12-0 Tigers, who’ve outscored opponents 545-72.

When the teams met in 2015, Katy’s defense was in the midst of an historic season, registering 10 shutouts in 16 games and giving up a total of 62 points on the season. Led by now-senior Michael Matus, the 2015 title game defensive MVP, Katy allows just six points per game and has posted four shutouts while holding nine of their 12 opponents to seven points or fewer. MaxPreps ranks Katy eighth in the country and tops in Texas.