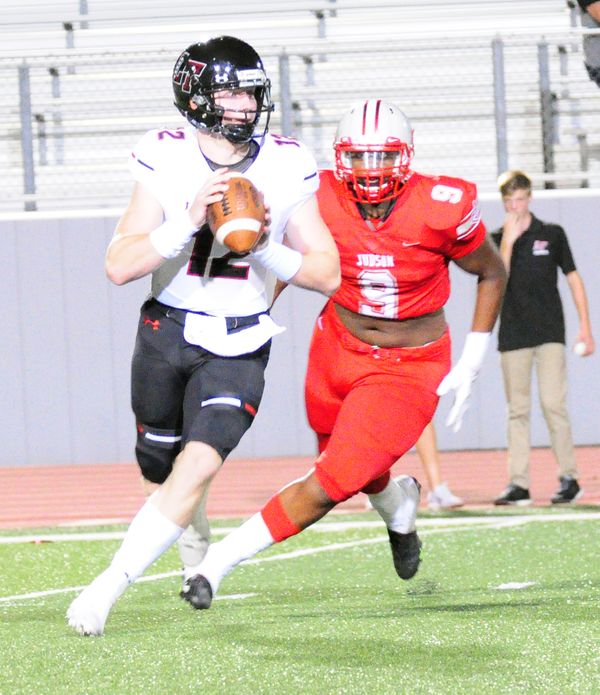 Judson pulls away from Lake Travis in offensive explosion

Top-ranked Converse Judson flexed its muscles Friday night, pulling away from sixth-ranked Lake Travis and opening the season with a 65-45 win.

Lake Travis, the reigning 6A, Division I champion, couldn’t contain Judson quarterback Julon Williams. He threw for 191 yards and two first-half touchdowns, then added 118 of his 222 rushing yards after halftime, consistently getting outside containment after forcing the Cavaliers to commit extra defenders to stopping the Rockets’ inside running game. He finished with 283 yards passing to top the 500-yard mark of total offense.

“They were just more physical than we were tonight,” Lake Travis coach Hank Carter said of the Rockets, who launched a record-setting attack against the Cavaliers’ defense.

All told, the teams combined for more than 1,300 yards of offense and 110 points. The 110 points rank second all-time to the 115 that Lake Travis and Steele combined to score in the Cavaliers 59-56, double overtime win.

Both teams came out sprinting. Baldwin found Wakefield to give the Cavaliers an early lead only to have Williams hit Kishaun Fisher for a 30-yard score on a fourth down to tie the game. Lake Travis led 10-7 and looked to take early control but Rashad Wisdom picked off an errant Baldwin pass and returned it 65 yards for a touchdown.

The teams traded scores until late in the half. Judson led 35-32 when it forced Lake Travis to punt for the first time. Williams responded by driving the Rockets 94 yards in just seven plays, capping the drive with a 22-yard scramble to close out the first half. Judson took control by scoring quickly to open the third quarter on Williams’ 40-yard run. He added a 69-yarder for good measure.