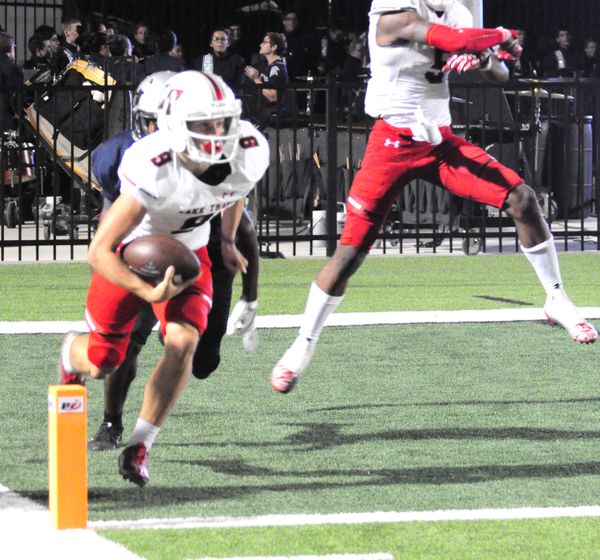 Lake Travis defense steps up with shutout of Hendrickson

Matthew Baldwin threw five touchdown passes and Lake Travis’ defense turned in its best performance of season as the Cavaliers shut out Hendrickson 48-0 at the Pfield.

After allowing 47 points per game and more than 500 yards of offense through the first three weeks, Lake Travis (3-1) allowed just 242 yards. The Cavaliers sacked Hendrickson (2-2) quarterbacks Blaine Barker and Adam Cousins three times and intercepted two passes in the end zone. The Hawks competed just nine of 24 passes on the night and didn’t complete a second half throw until the final two minutes.

“Our defensive line played better tonight, and to be honest that’s where we need to play better,” Lake Travis coach Hank Carter said. “We’ve got guys with experience and ability up there.”

“We were flying around the ball and having fun,” said Lake Travis defensive tackle Kade Langston. “We talked about it all week and knew that this was going to be our breakout game. We wanted to make a statement, and at the end we really wanted to keep them out of the end zone.”

After the Lake Travis defense stuffed Hendrickson on the game’s first series, Baldwin and the offense wasted little time getting going. Baldwin completed his first seven passes while marching the Cavaliers 68 yards, connecting with Garrett Wilson from 10 yards out. Baldwin and Wilson teamed up for two more first-half touchdowns as Lake Travis ran out to a 28-0 halftime lead.

Hendrickson threatened to score twice in the second quarter, but Max Foit and Wilson each came up with interceptions in the end zone to thwart the threat.

“It was a great team win tonight,” Lake Travis coach Hank Carter said. “Defensively, we flew around better and that’s what we were wanting to see. It was a good, positive step forward. The shutout’s a nice change from the last few weeks in terms of how many points we’ve given up.”