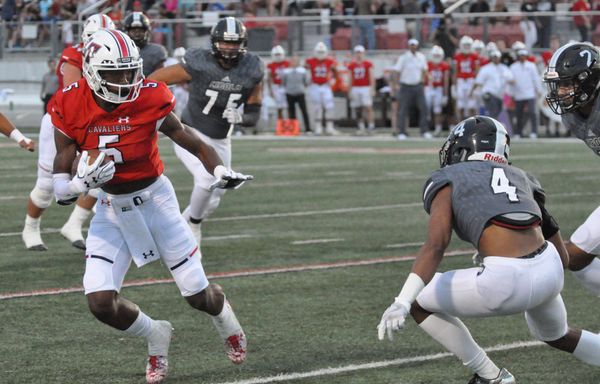 When defensive duty calls, Wilson comes through with pair of key plays

For all of his spectacular catches and timely punt returns, the two most significant plays Lake Travis wide receiver Garrett Wilson made Friday night came on defense.

As he did throughout the summer 7on7 season and in the season-opener against Converse Judson, Wilson took the field to help bolster the Cavaliers’ pass coverage against Cibolo Steele. His diving third-quarter interception stopped one Steele march deep into Lake Travis territory, and a timely tackle on third down denied the Knights a late first down, forcing a punt that eventually set the Cavaliers’ up for Cameron Dicker’s winning field goal.

“It was exciting to make plays that helped us,” Wilson said. “My teammates are counting on me to make those plays. I feel like if I don’t make them, I am letting my teammates down.”

Before the season, Lake Travis’ defensive coaches let Wilson know they wanted him to play cornerback in obvious passing situations, and he was more than happy to oblige. As the coaches planned for Steele, they noted that the Knights like to use all-state safety Caden Sterns as a receiver in passing situations. Lake Travis’ coaches decided that whenever they saw Sterns line up with the Steele offense, they’d cover him with Wilson.

A year ago, Sterns stepped in on offense, mostly when the Knights reached the red zone, and caught a trio of touchdown passes against the Cavaliers. With Wilson shadowing him Friday night, Sterns caught just three passes for 34 yards.

“He’s playing most of the offense and then has to come in for pressure situations and has to guard a guy going to Texas and that’s not an easy thing,” Cavaliers coach Hank Carter said.

Late in the first half, Sterns got the better of Wilson when he out-jumped him for a big play that led to a field goal, but Wilson made the play that left its mark on the game. After Cameron Dicker missed a 36-yard field goal attempt with four minutes left, the Knights faced a third and seven from their own 22. Onyx Smith hit Sterns with a quick pass, but Wilson met him at the line of scrimmage to force a punt. He made a modest two tackles on the night, but his second proved momentus.

“To me Garrett’s the best athlete in the country and we want to have him out there every moment that we can,” Carter said. “He’s a playmaker in every way.”

After his stop, he returned the Knights’ punt to midfield, and his offensive teammates did the rest to set up Dicker’s winning 37-yard kick.

Wilson will get the chance to make more defensive plays, though he may not be called upon to play cornerback as consistently as he did against Steele.

“I think I’ll be playing defense a little more,” he said. “I think it will be when there’s an obvious passing situation or when we’re playing a really tough guy to guard.”

Wilson proved – again -- he’s tough to guard when playing his natural position of receiver. He caught 10 passes for 163 yards against a secondary that featured a trio of FBS committed players. His offensive teammates found success as well, combining for 335 yards receiving as Matthew Baldwin completed 28 of 37 passes. Last season against Steele, Wilson caught seven passes for 144 yards and two scores.

“They have a great secondary, but we know we can throw the ball against anyone,” Wilson said.