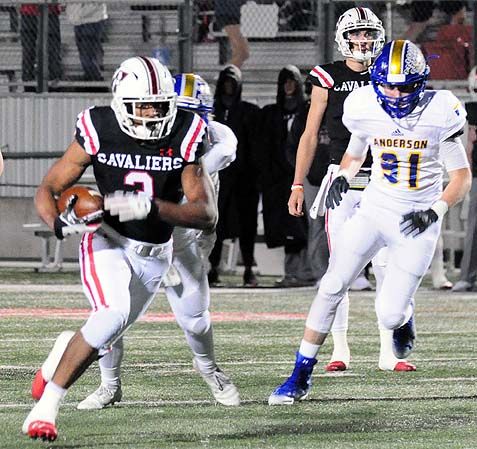 Lake Travis tuned up for next week’s 6A, Division I playoffs by cruising past Anderson 56-14 to wrap up the regular season.

Brown-Nixon’s touchdown came in the senior’s first game back after breaking his foot in Lake Travis’ season-opener. He rushed for 57 yards on just seven carries, helping Lake Travis’ stable of running backs that included Stephens, Marcelo Alanis and Erwin rush for 208 yards against Anderson’s defense.

“Having Seany [Brown-Nixon] back was really nice to see, and the combination of him, Weston, Marcelo and Wesley was pretty potent,” Lake Travis coach Hank Carter said.

The Cavaliers also found success through the air. Hudson Card threw touchdown passes to DeNisio, Eaves and Salvador Alanis, who enjoyed his best game on senior night with four catches for 109 yards, including third-quarter catches of 42 and 44 yards from backup quarterback Peyton Janecek.

“Sal can play, he really can,” Carter said. “He made two huge catches on a couple of great throws, and he had the big touchdown early. I’m very, very proud of him.”

Lake Travis’ defense kept Anderson, intercepting two first-half passes and recovering a fumble deep in Trojans’ territory. Though Coy Fullmer broke loose late and finished with 150 yards rushing, the Trojans managed just 199 yards of offense, only 47 of which came in the first half as Lake Travis built a 42-0 lead.

The Cavaliers will take a three-game winning streak into next Friday’s 6A, Division I bi-district playoff game against Smithson Valley.

“I like the way we were flying around tonight,” Carter said. “I thought we played physical football and played well on our defensive front, but no matter what it all starts over next week. It’s win or you’re done and we’ve got a big test coming in with Smithson Valley.”