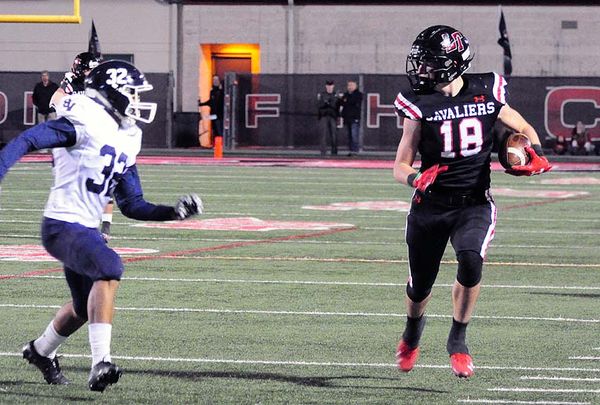 Cavaliers pull away from Rangers in Wilson's return

Hudson Card threw four touchdown passes and Garrett Wilson returned from a back injury to lead Lake Travis (9-1) to a 45-14 win over Smithson Valley (5-5) in 6A, Division I Bi-District playoff game.

Wilson, who missed four of Lake Travis’ last five games, returned to the lineup and caught six passes for 147 yards and a third-quarter touchdown that helped the Cavaliers break open a game they led 17-7 at the half.

“It feels good just to be playing with my brothers again,” Wilson said. “It’s awesome. I’m happy to be able to be out here.”

Wilson started slowly before making his mark in the second quarter, taking a short pass from Card and running 75 yards to set up a Hays McCannon field goal that gave the Cavaliers a 10-0 lead. Wilson caught a 5-yard touchdown pass in the third quarter to push Lake Travis’ lead to 24-7.

“The first half, I felt like I was falling over myself,” Wilson said. “Everyone was telling me ‘welcome back’ after I scored the touchdown. That felt good, but we still have a lot of work to do.”

Wilson’s score all but put the game out of reach, said Smithson Valley coach Larry Hill.

“We knew if we were going to have a chance we needed to get a stop on the first drive after halftime and then score,” Hill said. “To their credit, they came out and scored two or three touchdowns. They have a fine ball club and we weren’t able to keep pace.”

Card threw all four of his touchdown passes in the second half. He completed 17 of 28 passes for 346 yards and finished the game by completing his last eight passes, including the four touchdowns. Kyle Eaves caught two of the touchdown passes. Lake McCree added a 56-yard touchdown catch as the Cavaliers pulled away.

“We had some guys play gutsy games – Garrett, [running back] Seany [Brown-Nixon] – Hudson,” said Lake Travis coach Hank Carter. “We are a different team when all of those guys play together. Lake McRee, too. Kyle Eaves. Jojo [Patterson]. They all made big catches.”

Card connected with five different receivers to keep Smithson Valley’s defense, which had allowed less than 20 points per game on average heading into the game, at bay.

“That was a big test for us,” Carter said. “They don’t give up a lot of points and they really get after the passer. I’m proud of our kids.”

Levi Williams led Smithson Valley. The Rangers’ quarterback rushed for 101 yards and a touchdown but struggled through the air, completing just six passes for 53 yards. His second quarter touchdown brought Smithson Valley within 17-7, but Lake Travis’ third quarter surge put the game away.

Lake Travis advances to the 6A Division I Area playoffs against San Antonio Madison. The Cavaliers and Mavericks will meet Friday, Nov. 23 at 2 p.m. at New Braunfels Canyon High School.