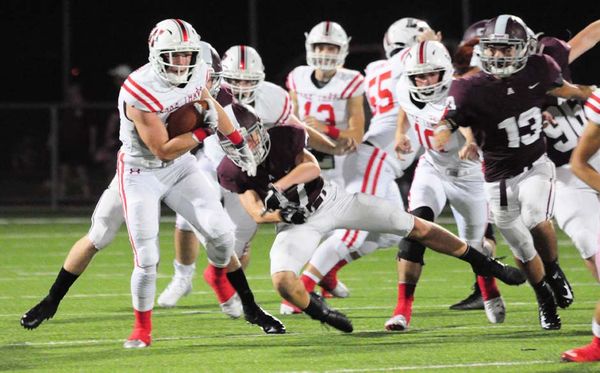 Hudson Card threw four first-half touchdown passes and added a touchdown run as the Cavaliers (4-0, 3-0 in District 25-6A) built a 52-7 halftime lead over the Maroons (2-3, 1-2). The University of Texas commit completed his first 12 passes and finished 19 of 22 for 254 yards before heading to the bench midway through the second quarter. He also rushed for 94 yards on just four carries.

“I’m excited because our guys came out playing really well,” Card said. “Anytime you’re done playing before the second half, it means you played really well in the first half. That’s what we did.”

Card connected with Kyle Eaves for a pair of touchdowns and also threw scoring passes to Garrett Wilson and Jeremiah Patterson. He added a 48-yard touchdown run that gave Lake Travis a 35-7 lead after the first quarter.

Lake Travis also got touchdown runs from Weston Stephens, Marcelo Alanis and Wesley Erwin, whose 68-yard score in the third quarter helped him rush for a game-high 107 yards on just 12 carries. Reid Donegan caught a 10-yard touchdown pass from Peyton Janecek as well.

“We had eight different kids score touchdowns tonight, which is fantastic,” said Lake Travis coach Hank Carter. “We did a lot of really good things.”

The Cavaliers gained 430 of their 590 yards before halftime while holding Austin High to just 93 first-half yards. The Maroons also suffered two first-half turnovers that led to Lake Travis touchdowns.