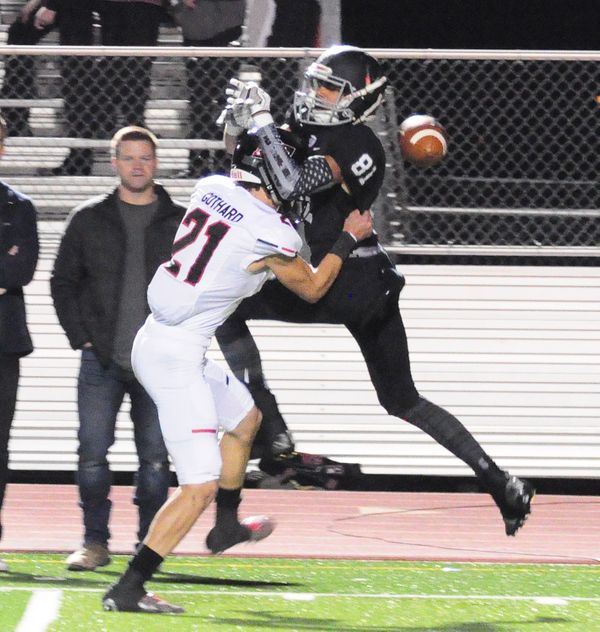 1. Allen ran over Lake Travis’ defensive front to close out last year’s 6A, DI title game. Will the Cavaliers be stronger up front in 2018?

3. Who replaces three-year starting kicker Cameron Dicker? The all-state selection is now kicking across town as a Longhorn.

CATCH BEFORE YOU THROW

A cradle of quarterbacks, Lake Travis has produced plenty of high-quality receivers as well. Rather than have young quarterbacks stay on the sideline behind experienced starters, Lake Travis often plays them at receiver. Starting quarterback Hudson Card put together an all-state season at receiver last season and said it’s an advantage to see the game from both spots. “I get two perspectives on things now. I know how I see things as a receiver and how I’d read each play,” he said. “That really helps me as a quarterback.” The plan works the other way, too. Ohio State-bound receiver Garrett Wilson previewed his game-changing ability while serving as a quarterback on one of the Cavaliers’ freshman teams in 2015 before joining the varsity late in the season as a receiver.

HE CAN COVER, TOO

Wilson turns plenty of heads with his big-play ability catching passes, but he also emerged as a lockdown cornerback when called upon by his coaches. In last season’s second-round playoff win over Converse Judson, Wilson scored three touchdowns on offense and played the bulk of the game on defense. What’s more fun: making a big play on offense or defense? “Big play on D,” Wilson said. “I’m not supposed to be out there, so I really enjoy making plays out there.” He intercepted three passes last season and held Allen five-star receiver Theo Wease to just three catches in the title game.

Senior running back Sean Brown-Nixon has turned heads in the Lake Travis backfield during preseason, staking his claim to the starting spot. Brown-Nixon’s name should be familiar to Cavs followers: older brothers Shaun (2011) and Aaron (2016) played on state championship teams.

Rick Cantu: Expect Lake Travis to win it all. Perhaps with an unbeaten record.

Thomas Jones: Yes. The Cavs would have beaten Allen last season if QB Matthew Baldwin had avoided injury and Hudson Card had stayed at receiver. No pressure, Lake Travis, but make room for the seventh star on your helmet.

2017 (13-3): Lake Travis proves the big boys don’t rebuild; they reload while making a surprising run to their third straight 6A title game.

2016 (15-1): With nine seniors who’d sign to play FBS football, Lake Travis regroups after an opening loss and rolls to its first 6A title.