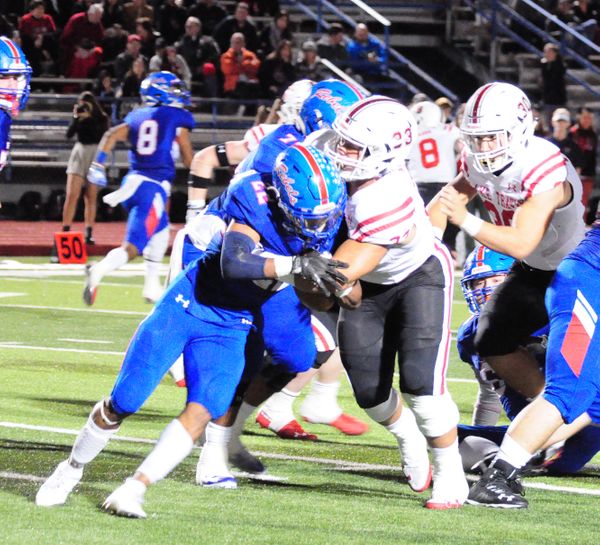 Lake Travis opened up a 41-7 lead and held off a late Hays rally to top the Rebels 44-28 and secure District 25-6A’s top seed in the Division I playoff bracket.

Weston Stephens rushed for three touchdowns and added a touchdown catch to spark Lake Travis’ offense, and the defense held Hays to just 168 yards of offense through three quarters.

“I’m pretty pleased with the way our starting defense played,” Lake Travis coach Hank Carter said. “That’s not an easy offense to prepare for. Kaleb Wenson is a big difference-maker for us inside and he played really well.”

Wenson, along with linebacker Nick Villareal, made several plays in the backfield to keep Hays’ effective rushing attack from gaining momentum. In building a 28-7 halftime lead, Lake Travis allowed the Rebels just 78 yards rushing, most of which came on an opening drive that tied the game at 7-7.

“It was really nice to get back in the game and create some momentum,” Wenson said, “and Nick made some big plays too.”

Villareal led the Lake Travis defense with 15 tackles. Mauricio Trevino contributed 13. Wenson added eight stops, including a sack and a tackle for loss.

After Stephens gave Lake Travis a 14-7 lead with his 9-yard touchdown catch on the first play of the second quarter, Villareal foiled Hays’ risky fourth-down try by throwing Devin Hines for a loss at his own 33-yard line. Five plays later, Stephens scored his third touchdown, and Lake Travis added three more unanswered scores to take a 41-7 lead.

Playing without Garrett Wilson (back injury) for the third time in four games, Lake Travis quarterback Hudson Card connected early and often with Kyle Eaves and Jeremiah Patterson. The duo combined for 15 catches and helped the usually quick-scoring Cavaliers go on time-consuming touchdown drives, keeping Hays’ offense on the sidelines. Lake Travis scored touchdowns on drives that lasted 15 and 16 plays, respectively, in the first half.

Card completed 25 of 34 passes for 214 yards, including a 22-yard touchdown to Peyton Janecek, and added another rushing touchdown.