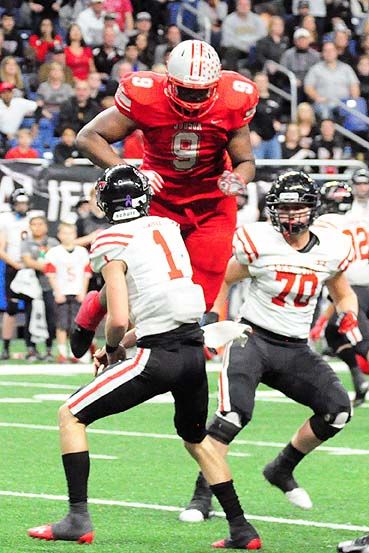 As is almost always the case this deep in the playoffs, Lake Travis’ reward for a 6A, Division I, Region IV championship win over one undefeated team is a date with another.

Following its win over previously unbeaten and 3rd-ranked Converse Judson, Lake Travis faces undefeated Galena Park North Shore. The Region III champion Mustangs will bring a 14-0 record and a No. 2 ranking into Saturday’s 2 p.m. game at NRG Stadium in Houston.

“They haven’t had to play a lot of close games,” said Lake Travis coach Hank Carter. “They’ve overmatched everyone by a long ways.”

Led by a massive offensive line, explosive skill players and as many as 13 players who could earn FBS-level scholarships by the time quarterback Dematrius Davis and receiver Shadrach Banks graduate in 2021, the Mustangs outscore their opponents 54-11 on average.

Though the teams have never met, they shared a field in 2015. Playing in the 6A, Division I state championship game, North Shore defeated Westlake 21-14 in overtime before Katy defeated Lake Travis for the 6A, Division II title. Those Mustangs relied an athletic, stingy defense to bolster a methodical, run-centric offense.

Four seasons later, North Shore still plays punishing defense led by linebackers Corey Flagg and Daymond Lewis. Opponents gain less than 200 yards per game, and more than half have failed to score more than a touchdown. While the defense follows the same formula, North Shore’s offense has exploded thanks to a line anchored by tackles Dameion George and Damarcus Thomas, both of whom resemble college linemen already.

“Their offensive line is bigger than Judson’s,” Carter said of a group that averages more than 300 pounds per man. “The tackles are the biggest we’ve seen all year.”

George and Thomas help pave the way for running back Zach Evans, another junior that Rivals ranks as the top running back – and player – in Texas for the class of 2020. Evans has rushed for 1,489 yards and 25 touchdowns, including all five of his team’s scores in last Saturdays’ 38-21 win over Cy-Fairbanks.

As impressive as Evans has been, he’s far from the Mustangs’ only weapon. Davis has been equally as accurate as Lake Travis quarterback Hudson Card, completing 71.6 percent of his passes for 2,811 yards with 36 touchdowns and just two interceptions, showing a poise and ability beyond his age.

“He is young but you’d never know if from watching him on film,” Carter said of the sophomore. “This will be one of the best passing offenses we’ve played against.”

Davis’ accuracy isn’t a result of throwing short passes. When the Mustangs throw, they gallop over big chunks of yardage. Receivers Banks, Chance Pillar, Charles King and AJ Carter all average better than 18 yards per catch and have combined for 30 touchdowns.

“This is the best collection of skill players we’ve faced,” Carter said. “They aren’t as tall as Judson’s receivers, but they are strong, fast and great with the ball after the catch.”

While the Mustangs have beaten the likes of Katy (twice), previously undefeated Dickinson, 2017 state champion Cy-Fair and 2018 Division II semifinalist Beaumont Westbrook, it’s likely that veteran coach Jon Kay has similar observations as he surveys the Cavaliers, who pulled away from the Rockets using an opportunistic defense and gritty performances from Card and Garrett Wilson, who combined for a trio of touchdown passes in the win.

“What a performance that was by Hudson,” Carter said after his junior quarterback delivered four touchdown passes and protected the ball in the face of a heavy pass rush by a big Judson defensive line. “He stood in there, took the hits and delivered the ball. That was kind of a coming out party for him, not that he needed one.”

Wilson’s dominating performance – eight catches for 149 yards and three scores while battling a sore groin and bruised back – made Carter smile as well.

“He never ceases to impress us,” Carter said of the Ohio State-bound receiver. “That was as gritty a performance as I’ve seen.”

Carter hopes his team has one more gritty performance in it. That’s what it will take for the Cavaliers to topple the state’s second-ranked team.

“This will be a challenge,” he said. “But we’ve got a collection of tough-minded, mentally tough kids, and that’s what it takes to win at this time of year.”