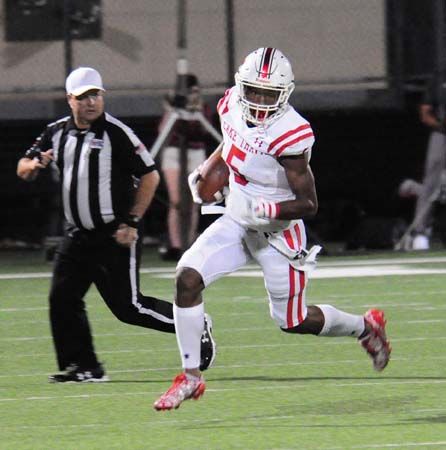 Introspective Cavaliers look to focus on details against Lehman

When he addressed his team on the House Park field last Friday, Lake Travis coach Hank Carter issued a challenge.

“When you watch the film tomorrow, you will see that we are very close to being a very good team,” Carter told the Cavaliers. “Can you identify the things that need work, and can we get to work on those?”

“I’m not trying to be the bitter old football coach,” Carter said. “We have to play and execute at a higher level, especially as the teams we play get more and more talented. We need to do things exactly right, not just kinda right.”

“I think offensively we have a chance to be really, really special, but we need to clean up a few things,” Carter said.

Neither quarterback Hudson Card or receiver Garrett Wilson have played in the second half since the season-opener, and in all likelihood that streak will continue Friday when the Cavaliers host winless Lehman. That prospect doesn’t mean that the Cavaliers take their foot off the gas, either in practice or the game. If anything, practice becomes even more contested.

“We practice really hard,” Foit said. “We practice with the same intensity every week. We want to treat every game like it’s state so we practice like we’re going to state every week.”

Despite three convincing wins to open district play, Carter knows – and makes sure the players know – that they aren’t ready for state just yet. The devil remains in the details, and Carter wants the Cavaliers to continue to eliminate mistakes. In the big win over Austin High, Lake Travis lost a fumble and drew 15 penalties that amounted to 144 yards. Penalties aren’t the coach’s only concerns.

“We have flashes in all three phases where we are tremendous, where we are as good as anybody,” he said. “But, we also have lapses where we have mental breakdowns and we don’t understand the situation. Not playing with leverage, not playing our football. For us to reach our goals, we have to play smart. Playing smart means knowing the down and distance, not jumping offsides, making sure that we turn our head on a deep ball so we don’t get flagged. We didn’t do that [against Austin High]. We still have plenty of reasons to go to practice this week.”

About the Lobos: Lehman has allowed at least 40 points in all four of its games, and as part of the unfortunate scheduling for District 25-6A, head to Lake Travis for the back end of the Westlake-Lake Travis double. The Chaps blanked the Lobos 54-0.

Quarterback Cayden Raymond has completed 56 percent of his passes on the season with four touchdowns, and versatile Bryant Lewis, who quarterbacked Lehman against Lake Travis in 2017, has emerged as one of Raymond’s favorite targets. He also plays a key role in the running game.

Series History: Lake Travis leads 4-0 with the last three wins by shutout. Lehman last scored against Lake Travis in 2014, a 51-14 Cavalier win, the first meeting between the teams.