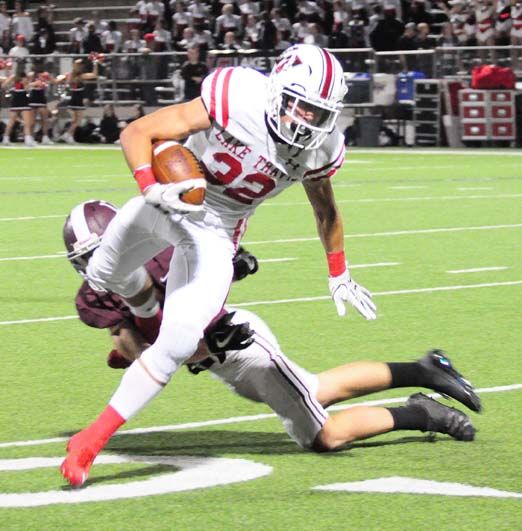 It took less than a full game for Lake Travis to rethink how it would establish a rushing attack to complement the traditional high-powered passing attack featuring Garrett Wilson and Hudson Card.

What started with senior Sean Brown-Nixon (lost with a broken foot) and has continued with a trio of sophomores, Lake Travis has discovered a rushing attack that can take advantage of opposing defenses that devote too much attention to Card, Wilson and Lake Travis’ other receivers – Kyle Eaves, Grayson Sandlin and Jeremiah Patterson.

“In four full games, we’ve had four different guys – five counting Hudson -- approach 100 yards rushing in a game, and I don’t know if we’ve had that before,” Lake Travis coach Hank Carter said.

The Cavaliers top 2018 rushing performances have been:

The trio of sophomore running backs have each stepped in and found their respective niche over the last four weeks. Add in Card’s rushing ability and the Cavaliers are punishing teams that sell out to slow the passing attack.

“The triplets,” Carter said. “We’ve got more of a running threat at quarterback and we have several guys who can run the ball and catch it.”

Stephens, Alanis and Erwin comprise Lake Travis’ three-pronged running back committee. Stephens stepped in as the starter and gives the Cavaliers a threat as both a runner and receiver out of the backfield. Alanis joined the varsity against Bowie and has emerged as an effective runner between the tackles. And Erwin is coming on strong after missing nearly all of his freshman season and the start of this season with leg and shoulder injuries.

“I call us Thunder, Lighting and the Morning Dew,” Erwin said. “I heard the Horn announcer [radio analyst Bucky Godbolt] talking about the running backs. He said ‘Marcelo Alanis is like thunder and Weston Stephens is like lightning.’ Everyone would come up to me and ask what I was, so I said I guess I’m like the morning dew because that’s kind of the after-effect of a night.”

Erwin’s made up for the missed time quickly. He followed a 67-yard debut against Akins with a 107-yard effort against Austin High, including a 68-yard touchdown.

“It had almost been a full year since I’d played a football game, so it felt really good to get into the end zone,” Erwin said.

Alanis carried the load in Lake Travis’ 42-21 win over Bowie and is the Cavaliers’ leading rusher with 231 yards, averaging nearly 8 yards per carry. He knows much of his success comes thanks to the offensive line.

“It all starts with trusting your line,” Alanis said. “I just try to read the right hole and after that, it’s all about falling forward when you get hit.”

Alanis’ ability to grind out yardage has impressed his coach.

“The fact that Marcelo has such a feel for interior runs is very odd,” Carter said. “Most running backs are there because they were the fastest or the hardest to bring down. Teams just pitch them the ball and they just run. Marcelo having a feel for those interior runs…that piqued our interest in the spring.”

Stephens has flashed an ability to get into space and churn out yardage, both taking the ball directly from Card or catching a pass out of the backfield. Playing limited snaps with the starters – he hasn’t been on the field in the second half since the season opener – Stephens has 168 yards rushing and has caught a pass in every game.

“I’m impressed with how Weston’s game has evolved,” Carter said. “The way he can catch the ball out of the backfield is phenomenal, and the way he’s learning to be patient on the interior runs is key.”

Despite dynamic play-makers at quarterback and receiver, Lake Travis’ still-evolving running game will go a long way toward determining the Cavaliers’ long-term success.

“I think that we have to be able to play multiple styles to give us the best chance to be successful offensively,” Carter said. “Our running game was different last year, and part of the difference now is I think our offensive line is a little more mature, a little more physical at this point. It just looks a little different [than last year], which is good. Hopefully this will pay off.”