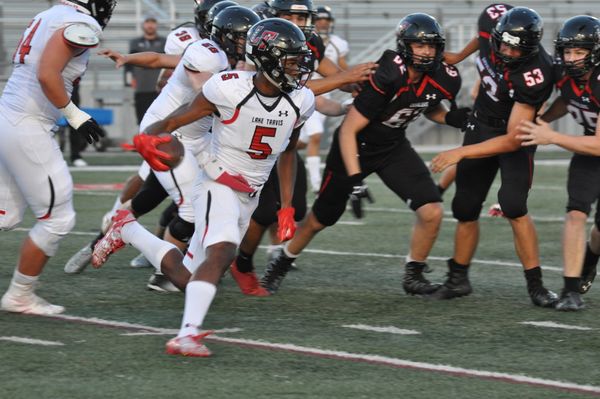 After being sacked on his first play and misfiring on his first pass, Card settled in. He connected on 12 of his next 13 passes, including touchdown passes to Wilson covering 64, 22 and 56 yards. Card finished with 276 passing yards.

“We have things to work on for sure, but it was a good day,” Card said.

And like predecessors Charlie Brewer (Baylor) and Matthew Baldwin (Ohio State), Card’s already very adept at getting the ball into Wilson’s hands. The 5-star receiver committed to Ohio State finished with 199 yards on eight catches with one acrobatic hurdle.

“We’re clicking every day in practice,” Card said. “It’s pretty easy to get him the ball.”

New offensive coordinator Will Stein said the offense is still finding its way with a new scheme, but behind Card and Wilson, they are on the right track.

“They’re both really good players,” Stein said. “They are still learning what we’re trying to do on offense, so this is just the beginning.”

“I’m really liked the way we caught the football tonight,” Stein said. “We had some guys miss tonight, but the ones who played really stepped up and caught the ball, guys like Sterling Hupp, Sal Alanis stepped in, Jackson Scruggs as well. They all did a really nice job.”

The Cavaliers’ starting defense, despite playing without a handful of expected starters – surrendered just 47 yards on 39 plays working against the second-team offense.

“Defensively, we want to play hard, play tough and play with leverage and we did some good things tonight,” said head coach Hank Carter.

Led by Simo Hunter and Aurelius Sofia, the defense sacked quarterbacks Peyton Janecek and Nate Yarnell five times and came away with three interceptions, two by safety Reece Anderson and another by Copeland Gothard.

Projected defensive starters Kaleb Wenson, Hunter Henry and Matthew Peterman were among those who sat out Friday night, as did offensive lineman Chad Wolf, among others.

“We had probably 15 players who didn’t play,” Carter said. “If they were even a little bit banged up and we felt we didn’t need to see anything more from them this spring, we held them out.”