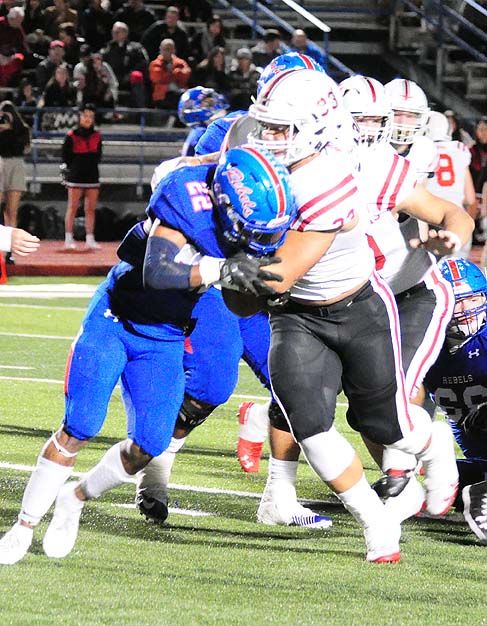 Win over Hays has Cavaliers preparing for season's first homestand

By topping Hays 44-28, the Cavaliers guaranteed themselves their first true homestand of the season. As District 25-6A’s top seed in the Division I playoff bracket, Lake Travis will host a bi-district playoff game for the fourth straight year. Coupled with this week’s regular season finale at home against Anderson, the Cavaliers play back-to-back home games for the first time since early in the 2017 season.

“That was a tremendous motivator,” Lake Travis coach Hank Carter said. “We wanted to be able to play one more game at home. We want to go into the playoffs as the top seed in our part, and we’re on schedule for that.”

Having achieved the goal of hosting a playoff game, Lake Travis hopes to close out the regular season on a high – and healthier – note. A win over a resurgent Anderson team would send the Cavaliers into the playoffs on a three-game win streak.

In addition to building momentum, Carter hopes to welcome back some key players. Garrett Wilson’s missed three of the last four games battling a back injury. Sean Brown-Nixon broke his foot in the season opener after running for 103 yards against Arlington Martin. Grayson Sandlin has missed three straight games. Andrew Salem missed games early. The list goes on, though Carter knows neither Anderson coach Daniel Hunter nor any other opposing coach will have any sympathy for him.

“Oh I know no one is going to feel bad that we are missing a few guys,” he said. “I’d just like to play a game or two with our full roster, especially as we head into the playoffs.”

If there’s any silver lining in the injury clouds, the Cavaliers have confirmed that they have a number of viable options. In Wilson and Sandlin’s absences, the offense hasn’t bogged down. In three games without Wilson, the Cavaliers have averaged 54 points per game. Kyle Eaves, Jeremiah Patterson, Cortland DiNisio and Peyton Janecek have accounted for 44 catches and 701 of 767 total passing yards in the games.

Eaves’ 10 catches against Hays mark the most any receiver’s had in a game since Wilson caught 12 passes in a win over Hendrickson early last season. Janecek, the primary backup to quarterback Hudson Card, has seen more playing time in the receiver rotation and caught five passes against Hays. He’s caught touchdown passes in each of the last two games. DiNisio’s caught seven of his 12 passes in those three games.

The Trojans have bounced back from last year’s 1-9 campaign to playoff contention in Hunter’s first year in charge, though not even an upset of Lake Travis and a Westlake win over Bowie can get the Trojans into the postseason. If Anderson and Westlake both win, the Trojans and Bowie would finish the regular season with 5-3 district records, but Bowie would advance based on a 27-0 win on Oct. 4.

In its district wins, Anderson’s used a consistent rushing attack led by Coy Fullmer complemented by timely, efficient passing from Carsten Groos. Groos has completed nearly 60 percent of his passes in the Trojans’ wins, and Fullmer has a pair of 100-yard rushing games and a 100-yard receiving game to his credit.