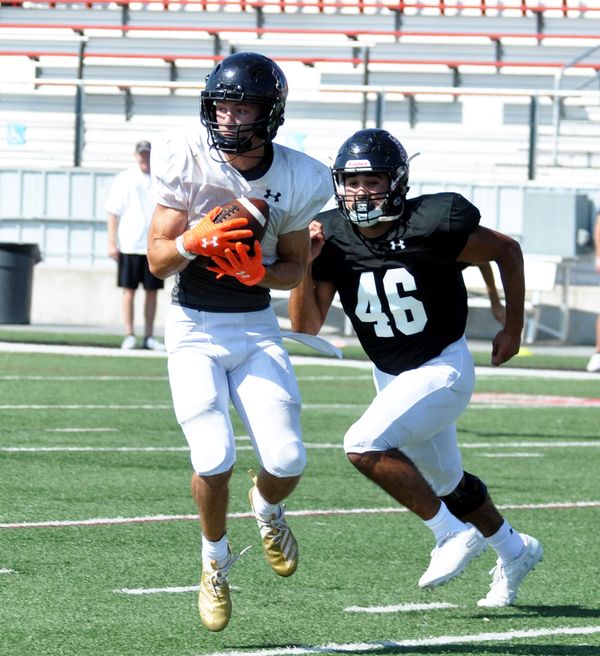 Around the offense: Card, Eaves hope for another explosive season

Most conversations about Lake Travis football begin with the offense, and with good reason. The Cavaliers perennially feature an FBS-bound quarterback and an abundance of skill players who keep scoreboard operators on their toes.

Heading into the 2019 season, that formula holds true, though a key preseason injury raises a question and could lead to some reshuffling that will provide new opportunities for players to emerge. Junior tight end Lake McRee’s injury removes a key component from the Cavaliers’ offense, but coach Hank Carter said a deep group of receivers can help lessen the blow.

In 2018, Lake Travis had seven players catch at least 17 passes. With McRee’s absence, only three return, but the Cavaliers have never been short on willing – or capable – receivers.

“I think we’re going to be in the same boat again this year,” Carter said. “Some of the guys we’ll count on were on junior varsity and some are guys who we may have been hiding on defense.”

Senior Kyle Eaves returns after a 69-catch, 1,052-yard season in which he served as Hudson Card’s primary target when Garrett Wilson was sidelined for a four-game stretch. Senior Grayson Sandlin missed much of 2018 with a shoulder injury and is eager to be a bigger part of the offense. His 6-foot-4 frame serves him well as a receiver who can also play inside as tight end when needed.

“I don’t know that there is a more ferocious competitor than Kyle Eaves,” Carter said. “He’s gotten bigger and stronger and he goes at full speed all of the time. And I really think Gray[son] is going to burst on the scene.”

Newcomers who have impressed in early practices include junior Jackson Scruggs, who played on the JV last season, and senior Max Foit, who saw significant time as a sophomore and junior playing both safety and cornerback.

“He’s got some pretty unique skillsets when he has the ball in his hands,” Carter said of Foit. “He is a really creative runner after the catch.”

Foit displayed that creativity during the team’s scrimmage on Aug. 17. After catching a short pass from Card, Foit wrestled away from linebacker Tag Humble and then battled former defensive back partner Copeland Gothard before stepping out of bounds just short of the goal line.

It was the second near-touchdown in Foit’s varsity career. Last season while playing defense against Bowie, Foit scooped up a fumble along the sideline and sprinted untouched into the end zone. A referee’s inadvertent whistle cost him the score, but the move to the offensive side of the ball may provide him more opportunities to find the end zone.

“I’m just trying to help the team wherever they need it,” Foit said. “I thought it was really good news when the coaches told me I’d be getting some reps on offense and I’m just trying to make the best of that.”

Though the offense scored just one touchdown during Saturday’s scrimmage, Foit said the Cavaliers continue to improve and overcome the early loss of a key player as the Aug. 30 opener against Arlington Martin draws near.

“It’s obviously a bummer that Lake’s gone, but I think we’re looking solid,” Foit said. “We’re doing some good things in both the run and pass games, and I know we’ll get better on Monday. We know the things we need to improve on before the first game and we’re going to take it from there.”

Quarterback: Card, fresh off a junior season in which he passed for 3,528 yards and 50 touchdowns, had an impressive summer, starring in the finals of the national Elite 11 competition. He’s the eighth consecutive Cavalier quarterback to earn a Football Bowl Subdivision scholarship. Nate Yarnell, a 6-foot-6 junior with several scholarship offers, will be the ninth. With Card at the Elite 11, Yarnell led the Cavaliers’ 7on7 team at the state tournament, gaining valuable experience running the basics of the offense.

Carter says: “One of the benefits of 7on7 is that the quarterback calls the entire offense. It’s a unique experience and I thought Nate was fabulous in that state tournament. He got the ball out on time, he put the ball where it needed to go and he was extremely accurate.”

Running back: The three-headed monster of Weston Stephens, Wesley Erwin and Marcelo Alanis all return for their junior seasons. Erwin, healthy after a rash of injuries during his first two seasons, took the bulk of the first-team snaps during Saturday’s scrimmage and broke off a 75-yard touchdown run. Stephens led the team in rushing last season, and Alanis excelled at gaining the tough yards in the middle of the line. As a trio, they combined for 1,377 yards and 17 TDs, more than enough to keep defenses from focusing on – and offensive coordinator Will Stein to reply on – Card as the Cavaliers’ main running threat.

Carter says: “We’re very excited about our depth there. Those guys have different skill sets so we’ll use them all where we can accentuate their abilities.”

Offensive line: The offensive line got a boost when junior Jacob Tracy moved over from the defensive line and won a starting spot at center. A state championship qualifier in the shot put and discus, Tracy is an athletic addition to a line anchored by three-year starters Dawson Weiss and Andrew Salem, who’s healthy after missing a handful of games in 2018. Todd Moon and Judge Niland also started in 2018.

Carter says: “Jacob is an exceptionally powerful athlete who can move really well. He is as good an athlete as we have had on the offensive line.”