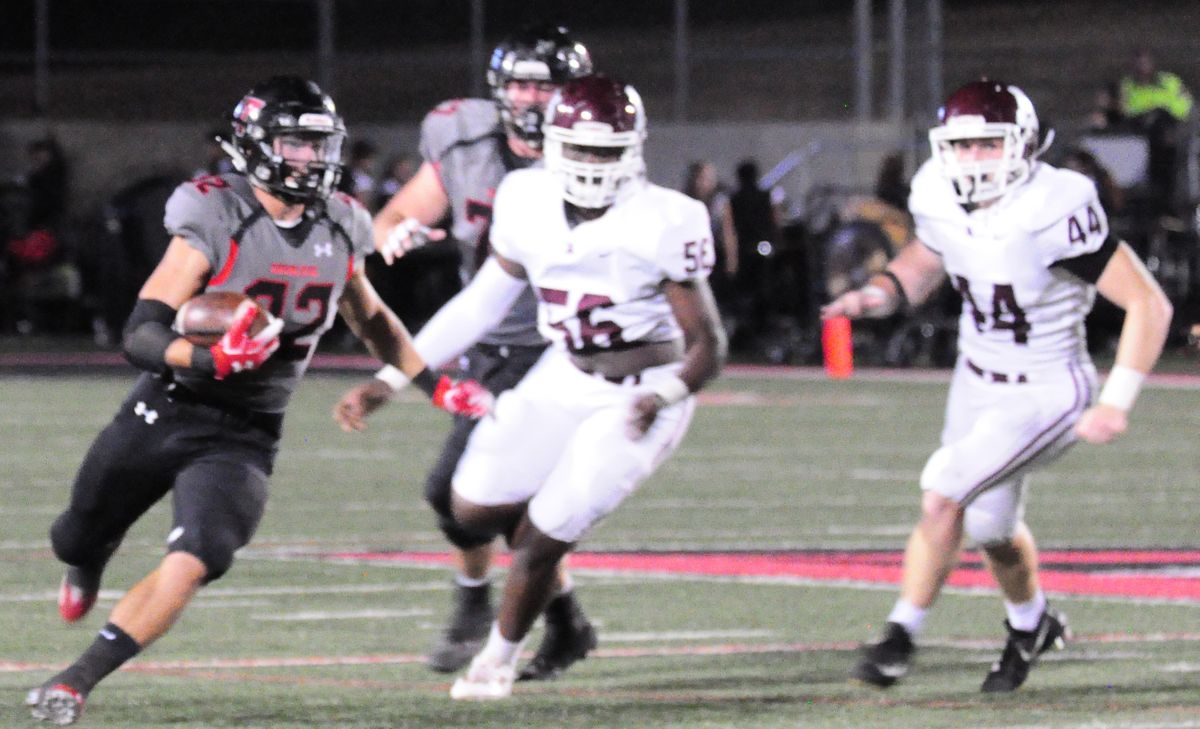 Lakeway – Lake Travis unleashed a barrage of big plays and shut out Austin High 63-0 in a District 25-6A game Friday night.

Grayson Sandlin and Kyle Eaves each had touchdown catches of 49 yards or longer and the Cavaliers rolled up 11 plays of more than 20 yards while gaining 730 yards of offense. Sandlin finished with 8 catches for 180 yards and two touchdowns.

“We have weapons all over the field and all of our receivers are capable of making big plays,” Sandlin said. “It’s really all about whoever is ready to catch the ball.”

Lake Travis (4-1, 3-0) had plenty of receivers ready, and quarterbacks Hudson Card and Nate Yarnell found them against an Austin High (2-3, 1-2) defense that’s allowed 60 points in each of the last two games. Card and Yarnell combined to complete 20 consecutive passes as Lake Travis recovered from what coach Hank Carter called a sloppy start.

“I think we made too many mistakes early even though we were scoring,” he said. “When we started running the football, our energy level picked up and that’s when we started breaking off big chunks of plays. Once that happened, we were able to do the things we wanted to do.”

Marcelo Alanis and Wesley Erwin ran for first quarter touchdowns to give the Cavaliers a 14-0 lead. Then Card took over. He spread the ball around between Sandlin, Eaves, Sterling Hupp and Isaac Norris, but it was Sandlin’s big-play ability that gave Lake Travis a boost. His 36-yard grab allowed Lake Travis to convert a 3rd and 17 on a drive that ended in an Eaves touchdown. His 49-yard catch-and-run just before halftime gave the Cavaliers a 35-0 lead.

“Grayson made a great catch on the sideline, but he makes those acrobatic catches pretty much every week,” Carter said. “I’m really impressed with the run after the catch [on the touchdown]. Those are the kinds of plays we need to be able to make, to break tackles and be difficult to bring down. That will get him to that next level.”

Card completed his final 14 passes before leaving the game early in the third quarter after he found Eaves for a 51-yard touchdown. Yarnell completed all six of his passes, including touchdowns to Max Foit and Weston Stephens. In all, the Cavaliers passed for 488 yards, and 12 different players caught at least one pass.

“Our defense was able to figure some things out and get them off the field,” Carter said. “It’s really hard to complain any time you don’t give up any points.”