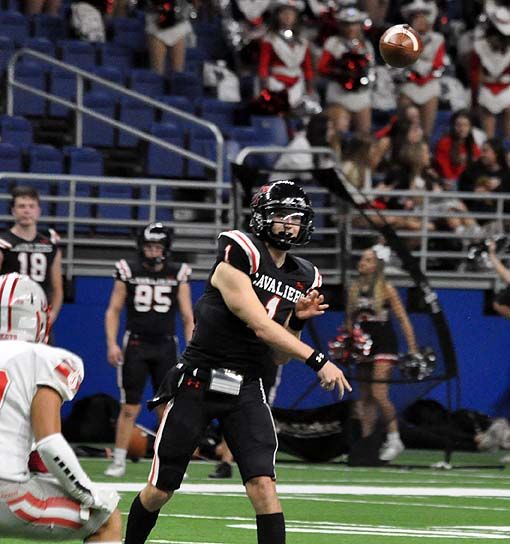 For the first time in a postseason full of rematches, it’s Lake Travis that’s looking to avenge a 2018 defeat.

Lake Travis (13-1) gets another crack at Galena Park North Shore (13-1) after the Mustangs bucked the Cavaliers en route to the 2018 6A Division I state title. While both teams have changed considerably from the versions that met last year as Saturday’s 4 p.m. kickoff at Round Rock’s Kelly Reeves Athletic Complex draws near, one thing hasn’t changed. North Shore looks every bit the part of a champion with no plans to relinquish its title.

“We understand that they are a great football team,” Lake Travis coach Hank Carter said. “This is another opportunity for us to test ourselves and a great challenge.”

How big of a challenge, exactly? North Shore’s offense, led by junior quarterback Dematrius Davis and senior running back Zachary Evans, is hitting its stride. After regular seasons in which coach Jon Kay tried to limit their wear-and-tear, they’ve run full-speed ahead through wins over Pasadena Dobie (54-0), Pearland Dawson (58-35), Katy (56-35) and Atascocita (76-49).

If defenses have sold out to contain Evans, who’s rushed for 703 yards and 9 touchdowns in the playoffs, they’ve failed to account for – or corral – Davis. The Virginia Tech commit has gained 742 of his 1,217 rushing yards in the playoffs. He’s been equally effective from the pocket as well, amassing 2,456 yards and 27 touchdowns through the air.

“We’re going to have to keep [Davis] inside the pocket and not let him scramble,” said Lake Travis cornerback Copeland Gothard. “We are going to have to tackle well, take them down. We can’t let them break tackles and keep getting yards.”

The Cavaliers bring a bit of defensive confidence into Saturday’s game, having slowed the Judson duo of Mike Chandler II and De’Anthony Lewis enough to let Lake Travis’ offense back into the game after falling behind 14-3. After Lake Travis opened up a 31-14 lead, Judson’s offense found some late success, but the Cavaliers made the Rockets work for their fourth-quarter touchdowns. That’s a model Carter says Lake Travis must duplicate against North Shore.

To do that, the defense will need to be as physical as it’s been to battle an offense line that averages 297 pounds. The size won’t phase the Cavaliers, but it will put a premium on holding up at the point of attack to limit running lanes for Evans and Davis.

“We’ve played big teams before,” Carter said. “They were big a year ago and they are big this year. We just need to execute and play fast, aggressive and physical. We did that at times [against Judson].”

If the Cavaliers can put the Mustangs in obvious passing situations, Carter believes that will present opportunities to make big plays. They can’t let those moments slip through fingers.

“It’s critical that when we have an opportunity, we have to capitalize,” he said. “There are going to be some chances on Saturday for us to make a big play, whether there's a ball in the air we can go intercept or to get pressure on the quarterback and to be able to create a turnover. We have to maximize those opportunities.”

Fast, aggressive and physical also describes what Carter wants to continue to see from the Lake Travis offense, which welcomed Hudson Card back to the lineup after six-game absence. After some early struggles, Card delivered a virtuoso performance.

“I guess he had a little bit of rust,” Carter said. “There were, what, maybe two throws he might like to have back? He got the ball out on time, whizzing it around the field. He moved around to buy himself time with his feet and made some big runs when he needed to.”

After throwing a second-quarter interception, Card completed 11 of his final 13 passes for 292 yards and three touchdowns. He finished with 342 yards passing and even added a rushing touchdown.

“In the locker room we decided we were gonna switch up our outside zone technique a little bit and we were really able to reach [their defensive ends],” offensive lineman Dawson Weiss said. “It kind of left Weston free to go.”

Stephens gained 195 of his career-best 227 yards after halftime. He’s gained at least 100 yards in six of the last seven games, and the Cavaliers are just as likely to score on the ground as they are through the air. In the playoffs, Lake Travis has averaged 228 yards rushing and 235 yards passing.

That balance gives Lake Travis confidence heading into the season’s most significant challenge.

“This year it’s more of a team effort, especially on offense because we’re more balanced,” Weiss said. “We are trusting ourselves and finding a new identity where we can run the ball, and I think that’s opening up plays for Hudson and the receivers.”

Carter, who calls Lake Travis’ defense during games, knows what a punishing rushing attack can do, and did do to Judson in the third quarter.

“I'm very encouraged by the way, we ran the football,” he said. “There's nothing more demoralizing for a football team than to have the ball run on you and not being able to do something about it. We've been on both sides of that.”

While North Shore’s offense has seemingly scored at will, rushing for 418 yards per game in the playoffs, the defense has had its moments of vulnerability. While the Mustangs allowed just 217 yards to Katy two weeks ago, last week Atascocita amassed 554 yards in a shootout.

With its quarterback back in action, the Cavaliers are ready for the challenge.

“We know they are a good team and athletic, but we’ll have a plan and be ready,” Card said. “We've worked all summer, all year. Everything we’ve done is to get to this point. We just have to be confident and trust what we’ve been coached to do all week.”