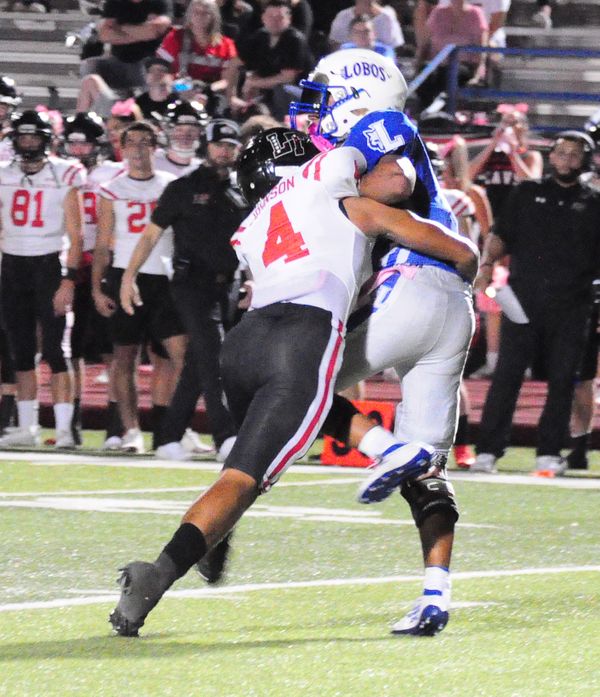 After weeks of waiting – five of them in fact – Lake Travis got a key piece of its defense back, just in time for the much-anticipated District 25-6A showdown with rival Westlake.

Sophomore defensive back Derrick Johnson, projected to start after earning a promotion to the varsity as a freshman, saw his first action of the season in the 59-7 win over Lehman. Johnson started in the secondary and played the first half, making a handful of tackles including one in the backfield.

“It was good to finally be back out on the field with the people I’ve been working with,” Johnson said on Saturday following the win. “There was definitely a lot of rust that I wanted to get off, but I think it was a good week to get back and get into game shape.”

“It was great seeing him out there moving around,” Lake Travis coach Hank Carter said. “He looked good, he looked fast, and that was good.”

Johnson injured his hamstring during the Cavaliers’ preseason scrimmage against Cedar Ridge – one of a handful of injuries Lake Travis dealt with that night. While Wesley Erwin, Watson Cusick, Jacob Tracy and a few others had already made their way back into action, Johnson’s recovery took longer, though he always had a target of being ready for this week’s game.

“There was a little bit of a setback in there where I was told I couldn’t have any physical activity, but in the end that’s what helped me get back this week,” Johnson said.

Though he hasn’t had a lot of game time, he’ll take the field Friday against Westlake as one of the fresher members of the team. He’s eager to face the Chaps for the first time on a Friday. He knows it will be a much different from his Thursday night experience as a freshman.

“I think I’m ready,” he said. “It was a little different playing on the freshman level before going to the varsity. People are bigger, obviously, and faster, but it’s still football.”

Young players sometimes overthink things when they get into big games, let the moment and environment make them do uncharacteristic things. In the buildup to his first taste of the Battle of the Lakes, Johnson says the key to success lays grounded in the basics.

Johnson adjusted to the varsity speed quickly. He made 22 tackles in six games, including two for loss, while working his way into the rotation at linebacker and defensive back, where he tries to emulate the legendary football player with whom he shares a name and almost nothing more – former Waco High School, University of Texas and Kansas City Chief Derrick Johnson.

“I get asked about it some, but maybe not as much as you’d expect,” Johnson said. “My mom’s name is Dee Dee and my dad’s name is Eric, so I’m a combination of those two. It just so happens that the year I was born was the year he was at UT.”

Beyond the shared name and sport, there’s no comparison between the players. Almost.

“He’s a bigger, real linebacker, and I’m more of a safety sort of, so it’s different, but I do try to play with his aggressiveness,” Johnson said.