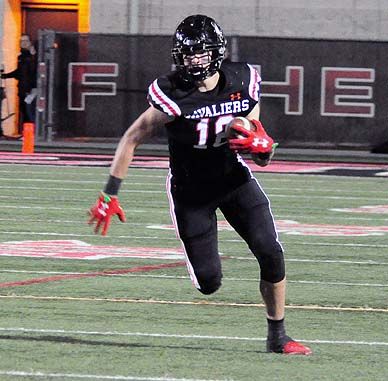 Tuesday morning, McRee announced via Twitter that he’d verbally committed to play his college football at the University of Texas. The decision came after McRee found himself without the use of his phone on a flight home following a long family weekend in California.

“It’s a funny story,” McRee said. “We were flying back from California and my phone died because I forgot to charge it, so I had a chance to do a lot of thinking.”

Alone with his thoughts on the three-hour flight, McRee came to very concrete realization.

“I realized that if I had a scholarship offer from every school in the country, I’d still want to pick Texas,” he said. “I got home and talked with my parents. Then I talked to [Lake Travis offensive coordinator Will] Stein. They said they supported that decision, so I called Coach [Derek] Warehime and Coach [Tom] Herman and told them I wanted to verbally commit to the University of Texas.”

McRee will join a Texas roster that has had a consistent Lake Travis presence under Herman. Tight end Cade Brewer and kicker Cameron Dicker will enter their junior and sophomore seasons, respectively, with the Longhorns. Hudson Card, the Cavaliers’ current quarterback, was the first player to commit in the Longhorns’ 2020 recruiting class.

McRee held offers from 15 schools including Texas. Others include Texas A&M and Arkansas from the SEC, USC, Arizona and Arizona State from the Pac 12 and Big 12 rivals TCU and Baylor. McRee said he’s glad to have the decision made.

“I decided that I didn’t want to keep going with this process and waste people’s time if I already knew,” McRee said. “I wanted to commit now so I could really focus on the season and focus on winning without having to worry about the recruiting process.”

McRee’s quickly risen up the recruiting ranks. Just 15 months ago, as Lake Travis entered spring practice prior to the 2018 season, McRee had been a big-bodied freshman B-team quarterback with no clear path to the position as a varsity player with Card entrenched as the starter and future Division I prospect Nate Yarnell waiting in the wings.

“If you’d told me last year at this time that I’d be here, I’d have thought you were crazy,” he said. “This has all been super-unexpected.”

When the coaches approached McRee moving to tight end, he listened, learned and trusted the move.

“We spent some practices moving back and forth between tight end and quarterback, but I trusted the coaches,” he said. “Every day since I made the move, things have really been looking up.”

Injuries delayed his emergence into the lineup. He joined the rotation late in the regular season but made a big impact while continuing to adjust to new levels of physicality.

“As a quarterback, you don’t have to block anyone, and then all of a sudden I’m blocking [Converse Judson all-state, 290-pound defensive end and Texas A&M signee] DeMarvin Leal,” McRee said in May.

McRee held his own as a blocker and excelled in the Cavaliers’ passing game with 16 catches for 255 yards and two touchdowns in just six games. With his college commitment behind him, he’s working toward bigger and better things in 2019, as is his head coach.

“I’m excited for Lake and his family and I’m really looking forward to watching him continue to grow and develop,” said Lake Travis coach Hank Carter.

McRee’s already eager to get back to work following his quick California vacation.

“We had a good 7on7 season,” he said. “That was a lot of fun and very good for us. I’m trying to get bigger, stronger, faster and better at running routes. I’ve worked in our Cavs Course [summer conditioning] and I’ve worked out by myself. I just want to be a completely different, better teammate in this next season.”