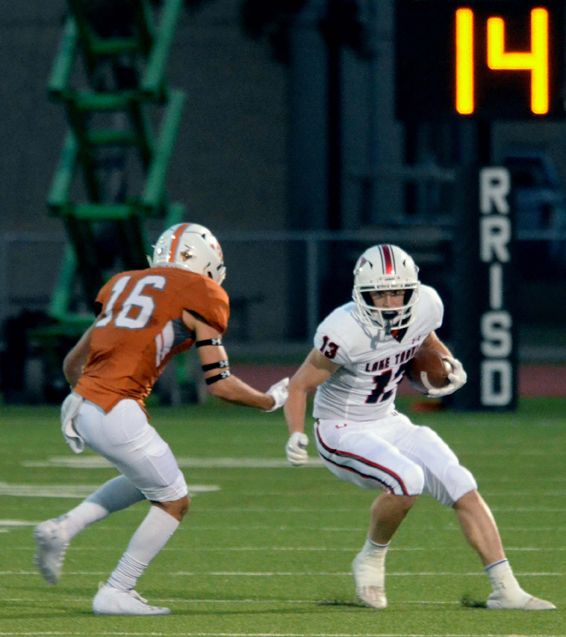 It turns out those Lake Travis coaches know a thing or two about their personnel.

Heading into the season, senior Aden Nava had been a two-year starter on the Cavaliers’ defense. When last year’s top two receivers – Kyle Eaves and Grayson Sandlin – graduated with their combined 263 catches and 46 touchdowns, the question about who would step up for 2020 seemed very real.

Except to Cavaliers coach Hank Carter.

“We knew Aden was going to have a great year,” Carter said after Nava, in just his third game as a receiver, turned in one of Lake Travis’ best single-game performances ever in a 70-35 win over Hays. “It was fun to see him make plays all night.”

Nava caught seven passes from sophomore Bo Edmundson for 215 yards and three scores. Nava’s 200-yard performance marked the first such game since Garrett Wilson posted 225 receiving yards against Hays in 2017. Zach Austin (2012), Cade McCrary (2007) and Fred Robinson (2005) are the only other receivers to top 200 yards in a game.

“Bo has a lot of trust in him,” Carter said. “The way the defense lined up, Aden had the favorable matchups a lot of the time, so we kept going to him.”

And Nava kept delivering. He broke open and grabbed a 12-yard pass from Edmundson to give the Cavaliers a 7-0 lead. He answered Hays’ first score with a 21-yard score. When Hays pulled within 42-29, Nava hauled in a long pass to set up a touchdown run for Marcelo Alanis. And on the first play of the fourth quarter, Nava got behind the defense for a 43-yard score.

Michael Kennedy, with seven catches for 123 yards including a 70-yard touchdown, also had a big night against the Rebels’ defense.

“We know our jobs and we all know what we have to do,” Nava said. “Bo is putting the ball on the money. We were really comfortable and executed our plays.”

While they executed against Hays, Nava knows the group, which also includes Jackson Scruggs (4 catches against Hays) and Lake McRee (who didn’t play against Hays), knows the season is still young.

“We still have things to work on,” he said. “We’re putting guys where we need them for the offense to be successful.”

With his defensive background, Nava knows that plan may also include him spending some time at cornerback when needed – much like Eaves did last year and Wilson did in 2017. That’s fine with him.

“I’m happy to help the team the best I can,” Nava said. “Wherever they place me, I think that’s my best position. I’m just trying to make plays.”