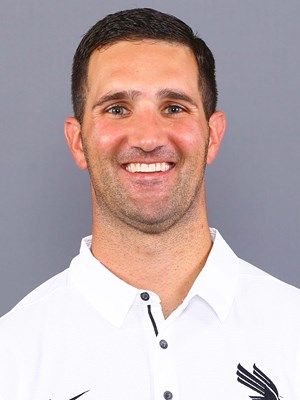 When he recruited in central Texas as an assistant coach at Iowa State and Kentucky, Tommy Mangino made sure to familiarize himself with quarterback-rich Lake Travis.

He knew Todd Reesing when the quarterback played and set records for Mangino’s father Mark at Kansas. As an assistant at Iowa State, he recruited Dominic De Lira. Three years ago, he tried to recruit Matthew Baldwin to Kentucky.

Now, Mangino will become much more familiar with Lake Travis’ quarterbacks, and he won’t have to do it from afar. Mangino joined the Cavaliers’ staff Feb. 11 as offensive coordinator and quarterbacks coach.

“When I got to Iowa State [as an assistant coach], I recruited here,” Mangino said. “I’ve always thought that this in an intriguing place. It’s always had success in football and with quarterbacks specifically.”

“He took a lot of pride in recruiting the area he was responsible for,” Carter said. “That always stuck with me.”

Those initial impressions aside, Carter said Mangino stood out in a highly competitive application process.

“This was the deepest field of applicants we’ve ever gotten,” Carter said. “We heard from a lot of accomplished, smart guys. He stood out as a great communicator with a heart for kids and an excellent coaching background.”

Mangino brings similar, if not more extensive, experience to the role as his predecessor, Will Stein. Stein also joined the Cavaliers’ staff without prior high school coaching experience. He’d served as a graduate assistant and offensive analyst at Texas.

Mangino comes to Lake Travis after serving as an analyst at North Texas along with coaching roles at Kentucky, Arkansas and Iowa State among others. He also served as offensive coordinator at Hutchinson Community College, where he directed an offense that tied or broke 15 school records. He cited the instability of today’s college coaching landscape – and the stability he sees with Carter, who’s been Lake Travis’ coach since 2010 – as primary reasons to get out of college coaching.

“It’s really difficult to find any stability at the college level,” he said. “It is the transfer portal for coaches, too. And you contrast that with [Coach Carter]. I know college coaches have reached out to him about jobs, but he’s chosen to stay. To see how committed he is to Lake Travis…I feel really good about that.”

During his tenure, Carter’s worked with four offensive coordinators – Matt Green, David Collins, Mike Wall and Stein – prior to Mangino. While the Cavaliers have held on to the same basic principles that helped the school win its first state championships, Carter gives each coordinator the freedom to modify the fast-paced, high-scoring attack to his own vision.

“We have our system, but it’s about the kids that give us the best chance to score a lot of points,” Carter said. “All of the guys that we’ve had have been able to put their own spin on it. Tommy is going to be running the offense and I’m confident he’s going to be a very good fit.”

Mangino will spend the first few weeks of his tenure meeting with coaches and players and installing the basics of his offense. He’s familiar enough already to know that some of the concepts will stay the same – though some terminology may change. He’s confident his new players will adjust quickly.

“I think all of these guys love football and they have a really high football IQ,” Mangino said. “That translates well to what I want to do.”

Mangino wants to continue to put an offense on the field that will compete for state championships. He also wants to put players in position to realize their football dreams. While Lake Travis will continue to send players on to college with opportunities to fulfill bigger dreams, he wants to make sure players whose careers will end in high school also realize their football dreams.

“I realize that high school is the last place some of these guys will play football,” he said. “I want to give everyone a fair shot to live out their dreams, having fun and having happy experiences.”

Players and coaches alike will begin to familiarize themselves with Mangino’s plays and vocabulary during athletics periods between now and mid-April. Carter expects spring practice to begin April 20 and wrap up with the spring game on Friday, May 15.