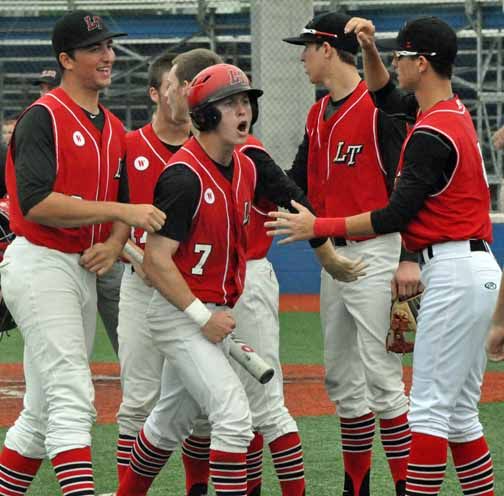 A season they won't soon forget

When they tell their children about the 2015 season, Lake Travis baseball players won’t spend much time talking about what happened between the lines, though they could.

The Cavaliers took fans on an improbable run to the brink of the regional finals, winning a pair of playoff series with tense, deciding game victories before seeing a dream season end in another third game, a 1-0 loss to Dallas Jesuit.

“At the beginning of the season, no one expected us to go on a run like this,” said senior pitcher Tate Gillespie, who blossomed into one of the Cavaliers’ most dependable post-season pitchers. “Last year’s team was much more hyped than this one, and that’s what made this year so special.”

Well, that and circumstances no one could have seen coming that forced the team to face some real-world issues and come together as a family. Those, rather than the many carved on the field, will be what the Cavaliers remember down the road.

“I’ll really remember how close this team became,” Gillespie said. “Halfway through the year, we just clicked and became a real family.”

Gillespie and coach Mike Rogers agreed that the team grew together to face issues that most high schoolers aren’t asked to face.

“They really bonded as a team,” Rogers said last week. “To feel each other’s joy and shortcomings, from a coach’s standpoint I think that’s all you can ask of a team, to see that kind of camaraderie, that kind of bond.”

The bonding began last spring, when Gillespie needed brain surgery after a line drive hit him in the head during a practice. Then, senior Ty Racca lost his father to cancer. And as the team put the finishing touches on some pre-season work in the winter, senior pitcher Walker Reese learned he had an aggressive form of cancer in his abdomen.

“That had a huge role in us becoming a family,” Gillespie said. “Those things – my brain surgery, Walker, Ty – brought us together and make us stronger. They helped us realize that this game we love isn’t life and death. It’s a baseball game.”

“You’re bringing a lot more important stuff to baseball and athletics to their daily life,” Rogers said. “It puts things in perspective and it allows those kids to handle a loss or defeat in a little different way.”

The Cavaliers used that perspective when things got tough during the season. All Gillespie needed for extra motivation – or to snap out of a funk – was a quick glance in the dugout at Reese, who’d recovered enough from chemotherapy to spend games with the team – especially during the season.

“Walker told us that he’d give everything to be out there with us,” Gillespie said. “Whenever we felt things were tough, we just looked at him and remember what he is going through. We decided we just had to keep playing for him.”

Reese made one memorable appearance during the season, starting a district game against Lehman, striking out the only batter he faced. His teammates picked him up from there and finished a perfect game against the Lobos. That night had a storybook ending even if the season did not.

After three nail-biting victories, the clock struck midnight on Gillespie and the Cavaliers in the fourth round. After winning deciding games in series against Klein Collins (a 6-plus inning relief appearance to win game 3) and Woodlands College Park (a complete game to win another game 3), Gillespie’s luck ran out in a 1-0 game three loss to Dallas Jesuit despite allowing just two hits and an unearned run. The Rangers got a four-hit shutout from Texas-bound ace Kyle Fuller. Gillespie relished the opportunities Rogers gave him and rose to the occasion.

“For a big player, that’s the kind of thing you dream about,” Gillespie said. “I wanted to be on the mound in those games and I did the best I could to give my team a chance to win.”

Against Jesuit, Gillespie appeared in all three games. He saved the opener for Tate Sandford before his luck ran out. With the Cavaliers just four outs away from a sweep of the Rangers, Gillespie couldn’t shut the door, giving up three runs as Jesuit rallied from a 5-2 deficit to win 9-6 with a seven-run sixth inning, leading to the deciding game and the duel with Fuller.

“When you go three games with as much emotion as there was, it’s going to be a tough roller coaster,” Gillespie said. “We were so close to winning game 2, and to be in there all the way in game 3, I think it shows how good both teams were. I’m proud to go out that way.”

The loss proved frustrating, but the coach called the season a smashing success and a great springboard into next season.

“We had a great year,” Rogers said of his team’s 25-9-1 campaign. “We were able to take a lot away from it. These younger kids, they have raised the bar this year. They’ve seen it done. They’ve seen how it’s done. The expectation is for the next group to take that and carry it forward. I think the future is bright here and it’s just going to be a matter of taking that chemistry and building on it.”